#MyDukeCancerStory: One Size Does Not Fit All 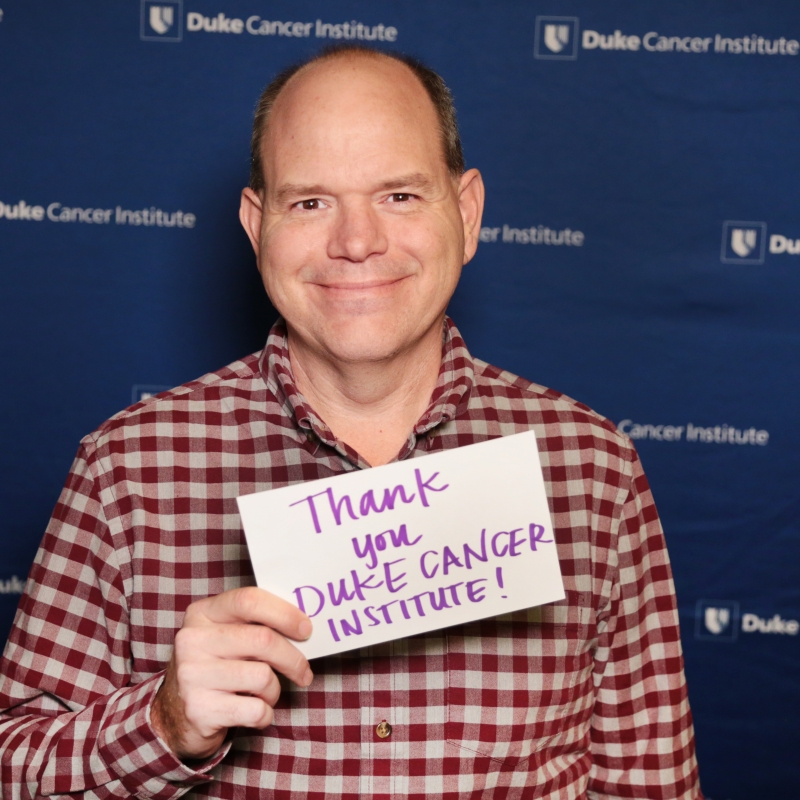 In 2004, Dennis Dunlow, now 47, experienced the moment that redefined his life: the birth of his triplets. Two years later, he experienced that thrilling moment all over again when his family welcomed their youngest son, making him a father of four. For Dunlow, his family has always been the treasure of his heart. When facing an unexpected diagnosis in 2017, it was his family that inspired him to never give up.

During the summer of 2017, Dunlow had a cough that would not go away. In August, with no other symptoms aside from his cough, he visited his local primary care physician in Clayton, North Carolina, and underwent a chest x-ray. When the results came back normal, his primary care doctor ordered a follow-up CT scan to further bolster confidence in the results of the original x-ray.

A few days later, Dunlow received an urgent call from his primary care physician. “Stop what you are doing and come, right now,” he remembers his doctor saying. “When I arrived at the primary care office, they told me the scan revealed a massive tumor between my kidneys and blood clots in my lungs. At that point, I was sent directly to the ER at Wake Med.” 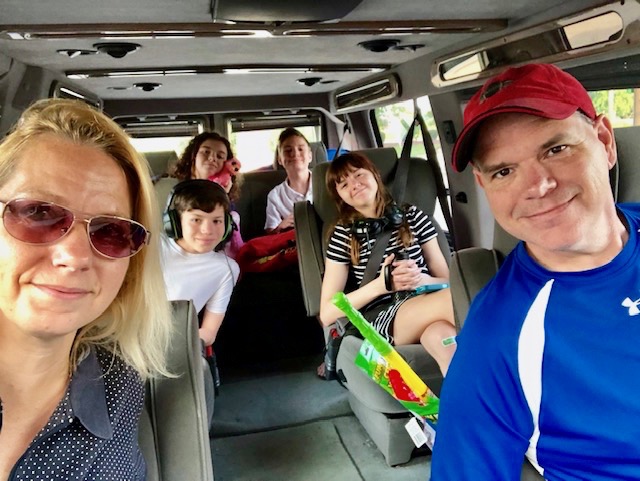 Dennis Dunlow and his family during a family vacation.After arriving at the local hospital, a urologist informed Dunlow that he had an inoperable tumor. “To be told that you are dying,” Dunlow tearfully begins, “is an impossible reality to face. I immediately thought of my wife and four young children, and I knew that I needed to do whatever I could to fight for them. I simply couldn’t accept the original prognosis and needed to get a second opinion.”

After leaving the hospital, Dunlow was referred to Sundhar Ramalingam, MD, a medical oncologist at Duke Cancer Center Raleigh. In September, at Dunlow’s first Duke appointment, Ramalingam informed him that his tumor was kidney cancer, and that it could be treated by surgery.

According the American Cancer Society, kidney cancer is among the 10 most common cancers in both men and women. Historically, kidney cancer is a male-predominant disease, and most patients are diagnosed in their 60’s. The strongest risk factors for kidney cancer are smoking and obesity, with only four percent believed to arise from hereditary syndromes.

Dunlow was immediately referred to Brant Inman, MD, a urologic surgical oncologist at Duke Cancer Institute. Inman, a world-renown surgeon, specializes in rare and uncommon tumors of the genitourinary system.

“Wow, what a guy,” said Dunlow. “During my first appointment with Dr. Inman, he came in and sketched out a drawing of my kidney so that he could explain to me where my tumor was located, and how it was invading the main vein into my heart. Most importantly, he told me that he could perform this surgery.”

Dunlow’s surgery to remove the tumor was scheduled for the last weekend of September, but three days after his original visit with Inman he suffered a “mini-stroke” and was quickly rushed to Duke Raleigh Hospital. During this visit, doctors looked more closely at the blood clot and discovered that it had actually formed inside a hole in his heart. 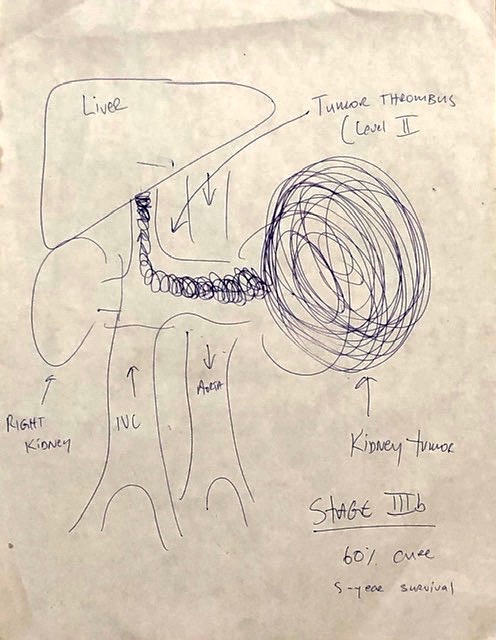 Dr. Inman's sketch of the tumor from Dennis Dunlow's first appointment.“From that moment on, everything became an emergency,” explained Dunlow. “I was immediately transferred to Duke University Hospital and surgery was scheduled for the next day.”

With the tumor invading the vein to Dunlow’s heart, Inman collaborated with John Haney, MD, a thoracic surgeon at Duke. The complex procedure involved two separate procedures - heart and kidney surgery. The surgical duo planned to first remove the tumor and repair the vein to the heart; the second surgery would then remove the blood clot and fix the hole in his heart. Both procedures were successful, and Dunlow was given a 60 percent chance of being cancer free.

Unfortunately, at a follow-up visit with Haney in October, Dunlow learned the kidney cancer had metastasized to his lungs and liver. He was referred to Tian Zhang, MD, a medical oncologist who specializes in advanced kidney cancer at Duke Cancer Institute.

“Immediately, I got the feeling that she was beyond just a doctor,” described Dunlow. “Dr. Zhang was at the forefront of kidney cancer research, and she knew exactly what therapies to use on my advanced cancer.”

In November 2017, based on a large trial presented just 2 months prior, Zhang began Dunlow on an immunotherapy combination that was not yet FDA approved. In order to receive this combination treatment, Stacey Lisi, PharmD, contacted the drug company to secure access to the drug for the patient. Integrating a pharmacist into treatment visits is an integral part of patient care at Duke.

“While attending ESMO 2017, I learned of the Checkmate 214 data and I knew this immunotherapy combination was an option for Mr. Dunlow’s care plan,” explained Zhang. “The results were wonderful, we immediately saw symptomatic improvement even in the first cycle. With the pain decreasing, we were able to help him return to his normal life, back playing tennis and returning to work. The treatment required four cycles before restaging scans, but we felt confident that this immunotherapy was successfully fighting the cancer cells.”

Immunotherapy is usually given until disease progression with scans obtained every 3 months. Dunlow returned for a CT Scan in July 2018. His scans revealed that the metastasized cancer had responded completely to the therapy. With Zhang, he made the important decision to stop his treatments and start surveillance for disease recurrence.

“If I didn’t have access to the immunotherapy, I’m positive I wouldn’t be here today,” explained Dunlow. “Looking back, I see how close I was to the end. How close I was to not being there for my children. For a guy who had been told that he had inoperable cancer, these physicians did the impossible. They not only fixed my heart, but helped me beat cancer. The Duke physicians are absolutely amazing and I will forever be grateful for the care I received here. They saved my life."