#MyDukeCancerStory: It Was Sink Or Swim For Military Vet 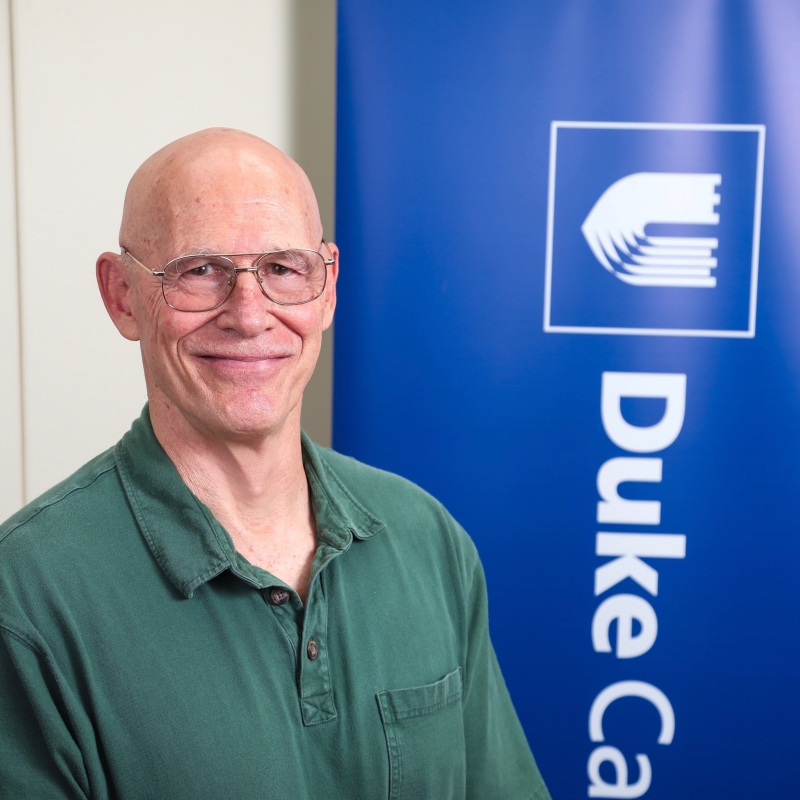 When Robert “Bob” List, 73, a retired colonel with the U.S. Marine Corps, was diagnosed with stage 2 prostate cancer in June 2006, he immediately began to research the “enemy” threatening to take his life. For more than 26 years List’s sole focus was to lead his men in tactical planning. No less treacherous than the adversaries he had faced on the battlefield, cancer, to him, would be no exception – he needed a weapon as adaptive and multiform as the disease itself.

“It was like someone turned the lights out on me,” recalled List, describing how he felt when he was diagnosed. “I hadn’t experienced any symptoms; I had always adhered to a healthy lifestyle. Initially, I told the nurse at my yearly physical appointment that, because I felt fine, they didn’t need to test my PSA levels. Boy, am I glad she insisted I undergo the test anyway.”
After his diagnosis, the Nichols, South Carolina, resident scheduled an appointment with his local urology practice. His doctor recommended surgery, but List wanted a second opinion. Less than a month after his diagnosis, List was at Duke Cancer Center with prostate cancer specialist Daniel George, MD.

The multidisciplinary clinic at the center includes rotating visits with oncologists from three disciplines: surgical oncology, radiation oncology and medical oncology. Working together as a team, his specialists devised a personalized treatment plan, which included a neoadjuvant radiation trial, testing radiation before surgery.

In 2007, his prostate cancer was no longer detectable; he was in remission. However, his cancer had a high risk of recurrence, so List stayed vigilant. In case the “enemy” returned, he would be prepared, alert and ready.

In 2009, his PSA levels started to rise. The cancer was back and this time, it was stage 4. As any warrior knows, military strategy revolves around the planning and conduct of campaigns, the distribution of forces and the utilization of battles to win wars. For List, it was time to pivot. He and his wife decided to retire earlier than planned and solely focus on beating his cancer. List knew he needed to be mentally and physically stronger than the cancer, so he added swimming to his exercise regimen.

Duke researchers have shown rigorous exercise helps combat the side effects of cancer treatment. While doctors recommend daily exercise for everyone, researchers are continuously studying the effects of physical activity in cancer patients, which has been shown to improve quality of life and ease some cancer-related fatigue. More, it can help fend off a serious decline in physical function that can last long after therapy is finished.

“I was a competitive swimmer in high school and college, so I started swimming again because it’s rigorous and keeps me in shape while at the same time preserving my bones – bones taking a blow from the treatments being used to save my life,” explained List.

List also searched for an outlet of support to help him during his treatment. He decided to join the local masters swim team in South Carolina.

“Basic battle strategy tells us that a period of respite restores the mind and strengthens the body, making a solider more effective on the frontline,” shared List. “My masters swim team is my own version of respite – swimming keeps my body strong and my mind sharp and focused.”

Under the care of George, List participated in two additional clinical trials, Disulfiram and Kanglaite, and eventually had a lung mass resected, confirming prostate cancer metastasis.  He started on hormonal therapy for a year and went into remission. In 2014, eight years and two recurrences later, List declared victory over his cancer. The treatment plan successfully disturbed the disease’s ability to wage a war against his body. Today, List is cancer free and off of all treatments for 4 years.

Still on his local masters swim team, List dominates the sport in his age group. Overall, the cancer survivor has won 21 medals at national championship swim meets and in 2015, he clocked the 10th fastest time in the world for the 50m breaststroke competition in his age group.

“I want people to know they can beat cancer and continue to do the things they love in life, they just need to believe in themselves,” shared List. “Look for active things to strengthen you – ride a bike, run or walk, swim. Devote your energy to getting better because I promise you it works. Most importantly, listen to your doctors – you chose them for a reason.”

The Duke Health and Fitness Center has a specialized program designed to help people undergoing and recovering from cancer treatment. A blended focus on fitness, stress management, and nutrition provide patients with the tools and support they need to maintain their strength, stamina, and positive outlook.