Being a Teen After Cancer 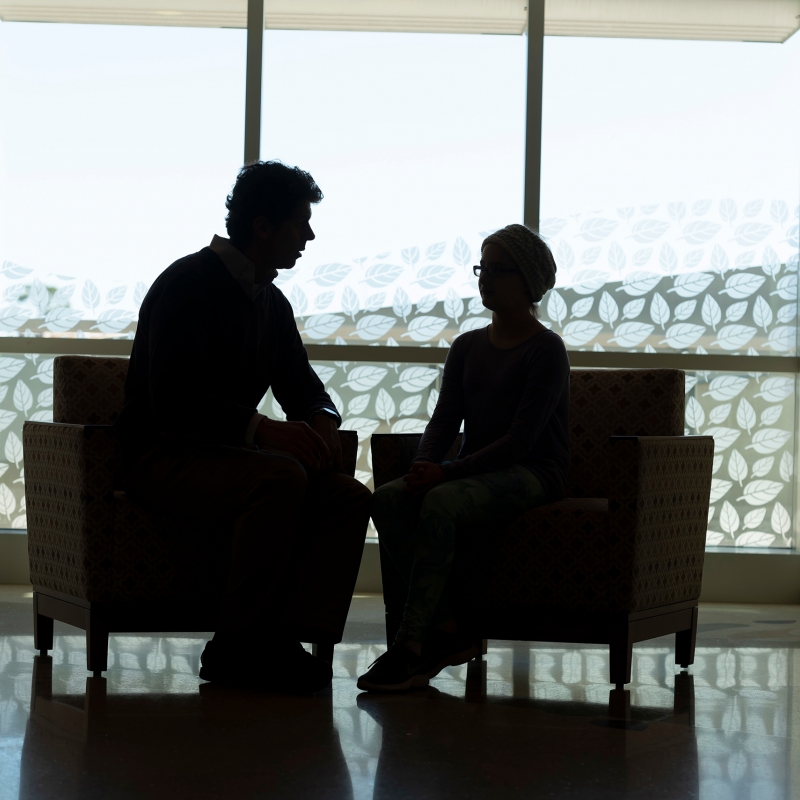 In December 2018, at just 13 years old, Avery Cooper had to spend her holidays staying at Duke University Hospital. After a brain tumor diagnosis in June 2018, she went through two surgeries at Duke and proton beam radiation therapy at another center. She endured infections and hydrocephalus (buildup of fluid on the brain).

None of this was normal for a young teen whose main concerns should be soccer games and sleepovers. But that was the reality for Avery.

After she was done with the surgeries and hospital stays, Avery started chemotherapy.

In the midst of that, she started meeting with Geoffrey Vaughn, LMFT, ATR. Vaughn is a medical family therapist with Duke Cancer Institute and part of Duke’s Teen and Young Adult Oncology (TYAO) program. The program provides teen and young adult cancer patients (ages 15-29) with support and community before, during, and after treatment.

Because of their schedules, Vaughn and Avery had their first meeting in the hospital cafeteria. She was still receiving chemotherapy, and it had upset her stomach. As soon as he sat down, Avery had to turn away to get sick. “Geoff just waited for her,” says Avery’s mom, Liz Cooper. “He took it in stride.”

Avery and Vaughn really began working together after she completed treatment.

“When you leave the last treatment appointment, it feels like you were dropped off on a dark street corner and you don’t know where you are,” Liz says. The flurry of frequent appointments was over. And Avery couldn’t do any of the sports that she loved before, like kickboxing and soccer. “It was a big blow to go from playing soccer to not being able to run at all,” Liz says. “I could be her mom, but I couldn’t fix any of it.”

“Geoff helps me feel more normal about my emotions and who I am now, after cancer. He's comforting and calm and helps me work through my feelings in a positive way.” -- Avery Cooper

Vaughn meets with Avery for individual therapy once a week. They have talked about ways she can make friends even though she is homeschooled, for instance. “Avery wouldn’t be as far along as she is today if it weren’t for Geoff,” Liz says. “They had an immediate connection. It just worked.”

A different family therapist also meets periodically with the entire family, including Avery’s sister, Anabel. Though almost 3 years apart in age, the sisters are as close as twins. When Avery had to spend Christmas in the hospital, the family got special permission for Anabel to spend the night there with her. Though so close, the sisters are very different, Liz says. Anabel is outgoing, light-hearted, and an early riser, while Avery is introverted, a day-dreamer, and a night owl. Liz calls Anabel the sun, and Avery, the moon.

By early 2020, Avery was on an upswing, Liz says. She had taken up swimming and felt optimistic. But the COVID-19 pandemic has made things harder for her. She stopped the swim team because of concerns about COVID-19 risk. And her therapy sessions with Vaughn are by phone now, which has its challenges compared to in-person therapy.

Still, Liz describes Vaughn as “a lifesaver.” And Avery is working with him to make the most of age 15. Avery says about Vaughn: “Geoff helps me feel more normal about my emotions and who I am now, after cancer. He's comforting and calm and helps me work through my feelings in a positive way.”