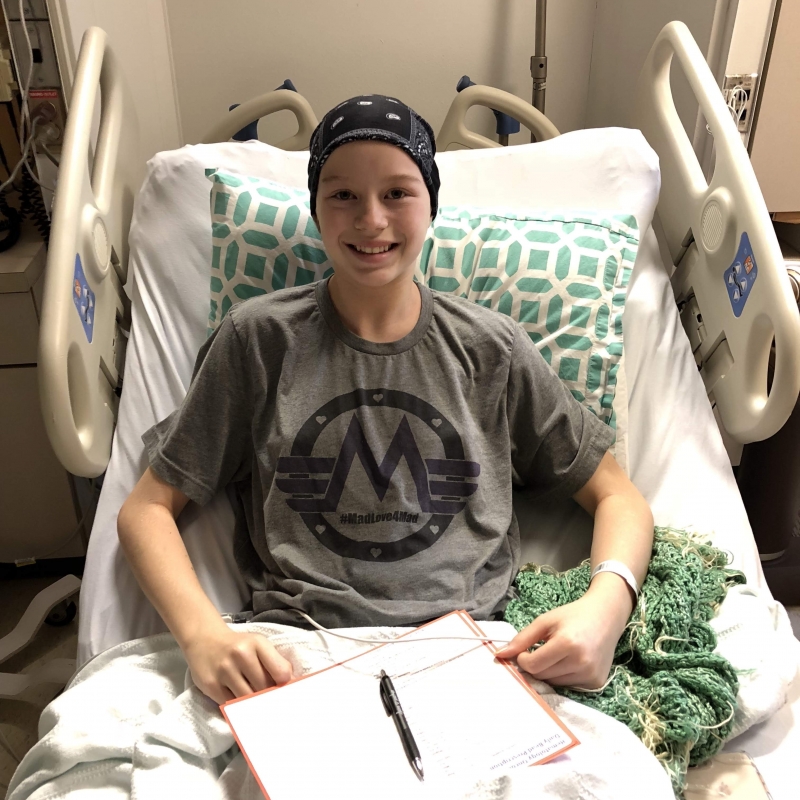 In many ways, Madelyn Wilson (her friends call her “Mad”) is like any high school senior. She is focused on college plans, including her dream of playing volleyball on a college team.

But at least one thing about her is different. In October 2017, at age 14, she had to put her life on hold and focus on beating stage four Hodgkin’s lymphoma. She had five rounds of chemotherapy at Duke.

In January 2018, she finished her last round of chemotherapy after being declared cancer free. She went to her prom and had a blast. She won a spot on the volleyball team at Apex Friendship High School.

But by spring 2019, the cancer had come back. She had to have a bone marrow transplant.

Being a young teen, Wilson straddled the world of children’s cancer treatment and adult treatment. She had treatments at Duke Children’s hospital and had scans and radiation at Duke Cancer Center.

She found her providers encouraging. “I don’t think I met a nurse at Duke who I didn’t get along with,” she says. “They did an amazing job of communicating with me and not just my parents. They really picked up on how interested I was in everything that was happening.”

But when she was admitted to Duke Children’s for the bone marrow transplant, that’s when she really felt the need to connect with other cancer patients her age.

“When I was inpatient for my transplant, I was the oldest on the unit,” she says. “The next closest person to my age was two years old. So that was pretty tough. That’s where those connections to teenagers I had met on social media became really important.” She video blogged her treatment as a way to help share her experiences and perhaps help other teens going through cancer: youtube.com/c/MadelynWilson.

Wilson’s bone marrow transplant was successful, and in December 2020, she was doing well.

Now that she’s had some time away from active treatment, she wants to help other teens who are going through the same things she did.

“I really struggled with my mental health during treatment and afterward. Survivorship is something that I didn’t realize would be so tough,” she says. “I got really good at having cancer. I knew when I was going to get chemo, when I was getting radiation, and I had everything down to a T. Then I got to the point where my oncologist was like, ‘Alright, I’ll see you in three months.’ I thought, ‘What? What am I supposed to do for three months?’ Adjusting back to real life was extremely challenging.”

That’s why she has begun using some of the services offered by Duke’s Teen and Young Adult Oncology Program. She has also been advising the program as an advocate—sharing her experiences as a patient with program organizers to help them improve it.

And Wilson is still focused on her dream of playing college volleyball. She reclassified as a high school senior for a second year, so she could have a chance at being recruited as a college player. The volleyball team at her high school was able to play a season with COVID-19 protocols in place.

“Through everything, that was part of what kept me going,” Wilson says. “My parents have done an amazing job of trying to support me and still make sure that I’m able to reach my goals.”

Duke Cancer Institute’s Teen and Young Adult Oncology Program (TYAO) provides teen and young adult patients and their families with support and community during a cancer diagnosis, treatment, and survivorship.

Are you a teen or young adult with cancer? Do you want to connect with others who understand what you are going through?
Join Duke's TYAO program for monthly virtual meetups.

Email TYAO@duke.edu to register and to learn more.