The Causes, Mechanisms of Transformation and Altered Growth Control and New Therapy for Primary and Metastatic Tumors of the Central Nervous System (CNS).

There are over 16,000 deaths in the United States each year from primary brain tumors such as malignant gliomas and medulloblastomas, and metastatic tumors to the CNS and its covering from systemic tumors such as carcinoma of the lung, breast, colon, and melanoma. An estimated 80,000 cases of primary brain tumors were expected to be diagnosed last year. Of that number, approximately 4,600 diagnosed will be children less than 19 years of age. During the last 20 years, however, there has been a significant increase in survival rates for those with primary malignant brain tumors.

For the last 44 years my research has involved the investigation of the causes, mechanism of transformation and altered growth control, and development of new methods of therapy for primary brain tumors and those metastasizing to the CNS and its coverings. In collaboration with my colleagues in the Preston Robert Tisch Brain Tumor Center, new drugs and those not previously thought to be active against CNS tumors have been identified. Overcoming mechanisms of drug resistance in primary brain tumors are also being pursued.

We have identified through genome-wide screening methodology several new target molecules selectively expressed on malignant brain tumors, but not on normal brain. These include EGFRwt, EGFRvIII, and two lacto series gangliosides, 3'-isoLM1 and 3',6'-isoLD1 and chondroitin proteoglycan sulfate. We raised conventional and fully human monoclonal antibodies against most of these targets as well as having developed single fragment chain molecules from naïve human libraries.

My personal research focuses on molecularly targeted therapies of primary and metastatic CNS tumors with monoclonal antibodies and their fragments. Our study we conducted was with a molecule we discovered many years ago, the extracellular matrix molecule, Tenascin. We have treated over 150 malignant brain tumor patients with excellent results with a radiolabeled antibody we developed against Tenascin. We are collaborating with Dr. Ira Pastan at NIH to develop tumor-targeted therapies by fusing single fragment chain molecules from monoclonal antibodies or from naïve human libraries to the truncated fragment of pseudomonas exotoxin A. One example of this is the pseudomonas exotoxin conjugated to a single fragment chain antibody that reacts with wild type EGFR and EGFRvIII, two overexpressed proteins on glioblastoma. The immunotoxin, called D2C7-IT, is currently being investigated in an FDA dose-escalation study, in which patients undergoing treatment of this investigational new drug are showing positive responses. My laboratory is also working with Matthias Gromeier, creator of the oncolytic poliovirus - a re-engineered poliovirus that is lethal to cancer cells, but not lethal to normal cells. The oncolytic poliovirus therapeutic approach has shown such promising results in patients with glioblastoma, that it was recently featured on a on a special two-segment program of 60 Minutes. The next clinical step will be to combine both the virus and the immunotoxin with anti-PD1, an immune checkpoint blockade inhibitor and with anti-CD40, a fully human monoclonal antibody which converts tumor stimulant macrophages into tumor suppressive macrophages. We believe that regional tumor-targeted cytotoxic therapies, such as oncolytic poliovirus and the D2C7 immunotoxin, not only specifically target and destroy tumor cells, but in the process, initiate immune events that promote an in situ vaccine effect. That immune response can be amplified by human checkpoint blockade to engender a long-term systemic immune response that effectively eliminates recurrent and disseminated GBM cells. Ultimately, all three agents may be used together, providing different antigenic targets and cytotoxicity mechanisms.

We have identified through genome-wide screening methodology several new target molecules selectively expressed on malignant brain tumors, but not on normal brain. These include glycoprotein non-metastatic B (GPNMB), a molecule shared with malignant melanoma; MRP3, a member of the multidrug resistant family; and two lacto series gangliosides, 3'-isoLM1 and 3',6'-isoLD1 and chondroitin proteoglycan sulfate. We are raising conventional monoclonal antibodies against all of these targets as well as developing single fragment chain molecules from naïve human libraries. When necessary, affinity maturation in vitro is carried out and the antibodies and fragments are armed either with radioactive iodine, radioactive lutetium, or radioactive Astatine-211. Other constructs are evaluated for unarmed activity and some are armed with Pseudomonas exotoxin. After development of the constructs, they are evaluated in human malignant glioma xenograft systems and then all studies necessary for Investigational New Drug Permits from the Food and Drug Administration are carried out prior to actual clinical trial.

I was senior author on a New England Journal of Medicine paper that was the first to show markedly increased survival in low to intermediate grade gliomas with an isocitrate dehydrogenase mutation.

The first fully funded Specialized Research Center on Primary and Metastatic Tumors to the CNS funded by the National Institutes of Health, of which I was Principal Investigator, was funded for 30 years at which time the type of grant was discontinued. My NCI MERIT Award, which ranked in the upper 1.2 percentile of all NIH grants at the time of its last review, is currently in its 40th year of continuous funding. It is one of the few MERIT awards awarded three consecutive times, and it is the longest continually funded grant of the NCI Division of Cancer Diagnosis and Treatment. My last NCI Award was an Outstanding Investigator Award from 2014 to 2022.

My laboratory has trained over 50 third year medical students, residents, Ph.D. students, and postdoctoral fellows and I have a great deal of experience in career development with some students having advanced all the way from fellowship status to endowed professorships. A major goal with third year medical students is to perform work that can be presented in abstract form at national or international meetings and to obtain publication in major peer-reviewed journals.

Member of the Duke Cancer Institute

Vaccine Immunotoxin and Radioimmunotherapy of Primary and Metastatic CNS Tumors

SRC on Primary Tumors of the CNS

Epigenetic STING silencing is developmentally conserved in gliomas and can be rescued by methyltransferase inhibition.

Phase I trial of intratumoral PVSRIPO in patients with unresectable, treatment-refractory melanoma. 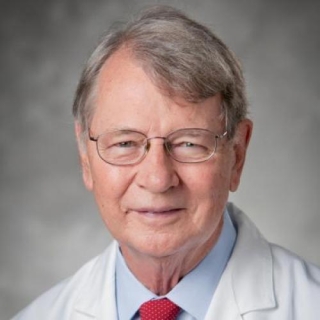