A Call To Service For Clinician Turned Cancer Patient 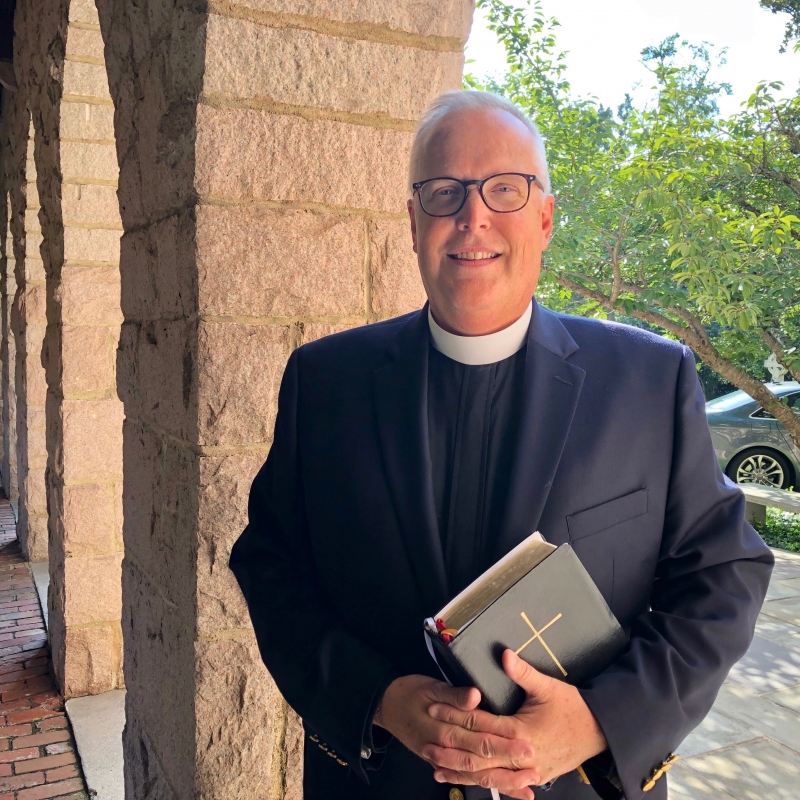 Just after the New Year in 2017 Duke Cancer Institute physician assistant Scott Balderson, PA, was ordained a deacon in the Episcopal Church —  a milestone in a long spiritual journey that's mission, he said, paired perfectly with his 20 years of clinical service to lung cancer patients.

“Deacons serve all people, particularly the poor, the weak, the sick, and the lonely,” said Balderson. “They are frequently ministers in the church who, just like me, still have their secular vocations. In fact, my work as a physician assistant in thoracic surgery is very much a part of my calling and ministry.”

The ordination almost didn’t happen. Balderson’s religious studies and work as the PA for Thomas D’Amico, MD, were temporarily interrupted three-and-a-half years ago when Balderson was diagnosed with stage-four diffuse large B-cell lymphoma, the most common type of non-Hodgkin lymphoma. He was 48.

He’d been traveling with his family to see friends over the Martin Luther King Day holiday weekend, when he picked up a really heavy suitcase, hurting his back in the process.

“The pain was really bothersome,” said Balderson “It got progressively worse over the next few weeks, but life around here (at work) is really busy, so I went on with things.”

He even made a scheduled trip to Baltimore for a review course for his PA boards re-certification test that was coming up. But while up north, the pain continued to get worse, and on the last day became unbearable, debilitating. He couldn’t see straight. He couldn’t function.

When his wife picked him up at the airport in Raleigh, Balderson had her drive him straight to the emergency department at Duke.

“At first it was a terrifying ordeal because with every test I had, the level of information got worse,” said Balderson, describing what it was like when physicians began to troubleshoot his problem. “They said I had back pain because I had a T7 compression fracture in my spine, which wasn’t good news. Then they said the fracture was caused by a cancerous tumor in my back. Then they said they found a couple more tumors. Then they identified some spots in my hips and legs. Those first days just went from bad to worse.” 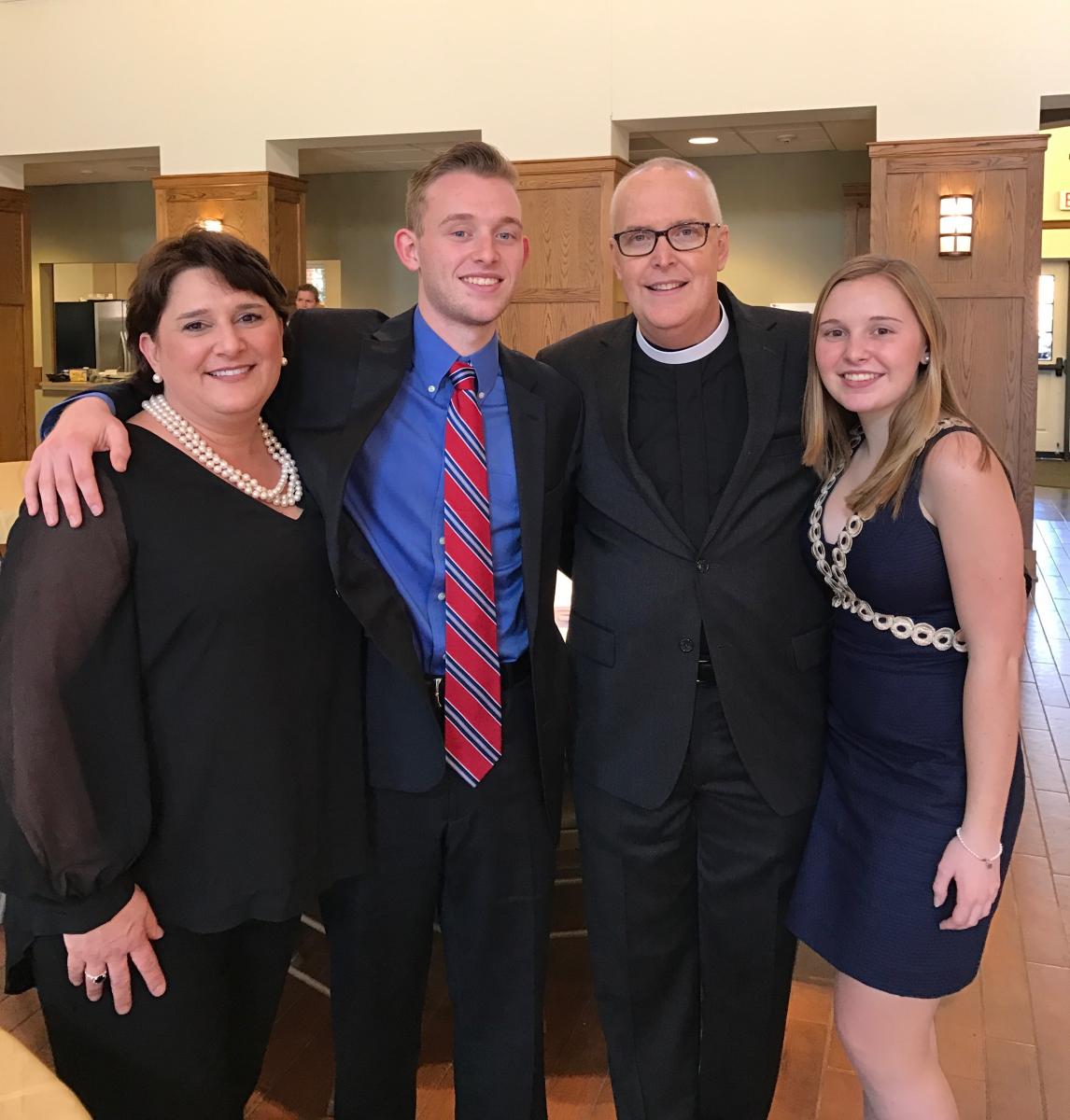 Scott Balderson, PA, was ordained a deacon in the Episcopal Church at the Canterbury School in Greensboro on January 28, 2017. Here he is at the ordination with his proud family; his wife Christina, his son Carter and his daughter Isabel.Balderson was treated with high-dose steroids to bring down the inflammation caused by the tumor in his spine. After five days in the hospital, and still in some pain, he left using a walker.

He came under the care of oncologist Louis Frederic Diehl, MD — who he’d collaborated with professionally for years. Under his guidance, Balderson went through six cycles of an R-CHOP chemotherapy regimen (including the drugs rituximab, cyclophosphamide, doxorubicin hydrochloride, vincristine sulfate, and prednisone) from February through early June 2015, followed by radiation treatments, advised by Chris Kelsey, MD, that were completed by mid-July.

During the first couple of months of treatment, especially, there had been no getting around the fact that Balderson, who was so used to taking care of others, was now the patient. Used to being a bit of a work-a-holic, he was “off the grid.” His sister Ridgely, who’d help him start an online Caring Bridge journal, wrote in March 2015 that her brother was an “A + patient, with no complaints.”

“He's finding a new rhythm to his days ... morning prayer, walking, shower, desk time and rest time,” wrote Ridgely in March 2015, a week after Balderson started his second treatment cycle.  “He is getting around really well and clearly relishing the extra time at home with Carter and Isabel (his kids).”

Cleared of cancer by the summer of 2015, Balderson’s follow-up visits with Diehl through December 2015 continued to show “no evidence of disease.”

While Balderson had worked as much his treatment schedule and side-effects allowed that summer by the fall he was back in clinic full-time; working toward establishing what many cancer survivors call “a new normal.”  For Balderson, this meant not as many late nights at home catching up on work, though there was always a lot to catch up on, and no more cycling or triathlons due to his still ailing back. Walking was now more his speed.

Then, in August 2016, a few weeks shy of a surveillance appointment, he started feeling “really rough and run down.” He made an appointment to see Diehl early. Diehl drew some blood and found Balderson’s LDH marker elevated, so he advised a PET scan. It showed a very large retroperitoneal mass (back of the abdomen), so Balderson began chemotherapy the next day.

This time the treatment formula was R-ICE (rituximab, ifosfamide, carboplatin, etoposide phosphate), a more toxic chemotherapy combination than before. He endured three cycles, in August, September and early October, and had “a great response.” No tumors. The next step was a bone marrow transplant in November, using his own stem cells (autologous transplant) to rebuild his immune system.

“It was hard; I never felt so sick in my entire life,” said Balderson, who was grateful to be able to receive follow-up supportive care in his home as part of a clinical trial.

He had some complications — diverticulitis and “a little transient kidney failure” — that required a two-and-a-half week hospital stay, but he made it home in time for Thanksgiving. 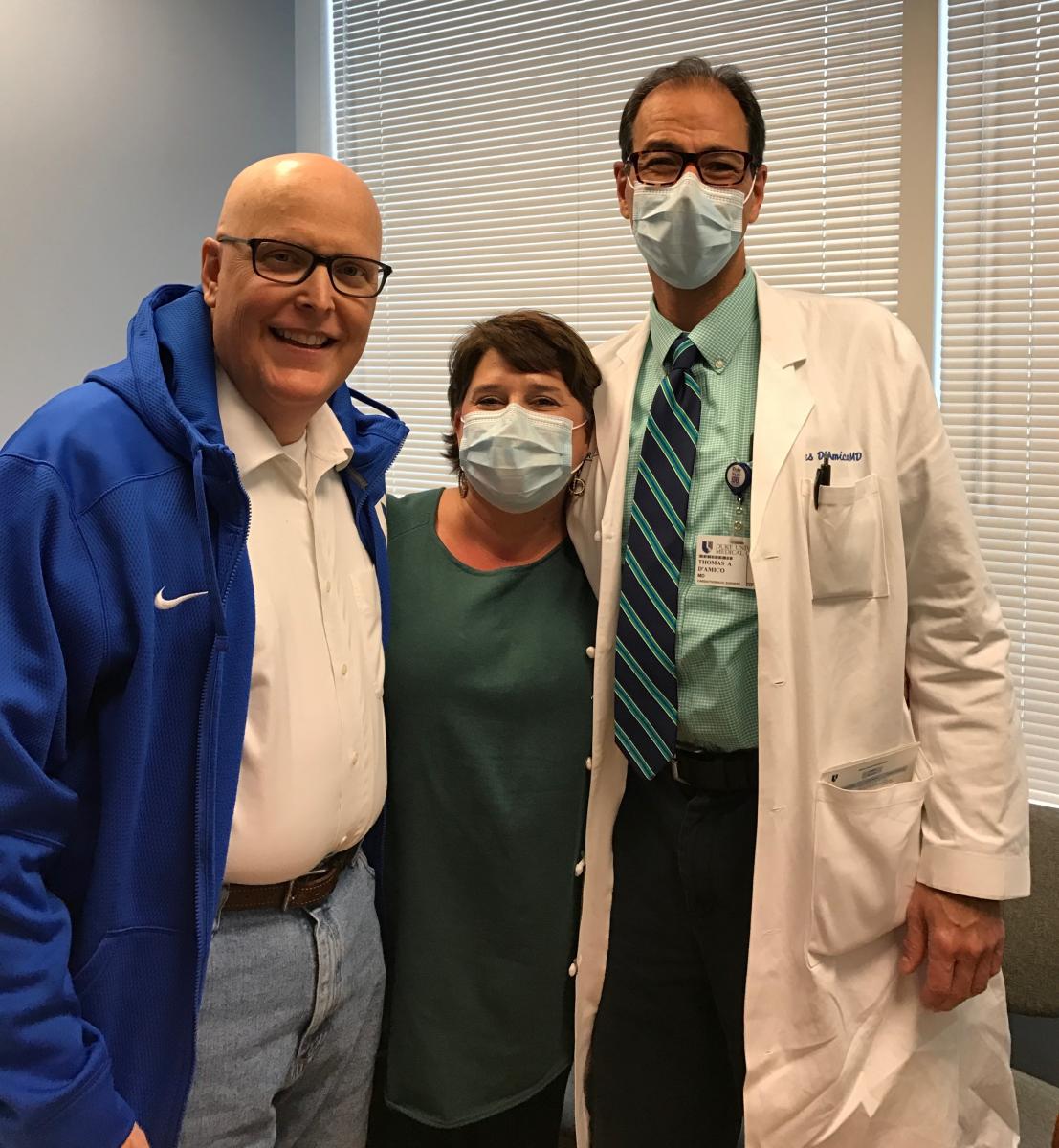 Scott Balderson, PA, has not only worked for Thomas D’Amico, MD, for 20 years, he considers him his friend. “I cannot recollect a moment in the hospital where Tommy D'Amico was not by my side,” said Balderson (left), pictured here with his wife Christina and D'Amico (right).  Balderson said that throughout his cancer battle he was “held by an immense community of faith and prayer and love” that included friends, many of whom were colleagues, and family, and “in the best possible hands, at the best place on the planet to be a patient.”

“When there were junctions in the road, I had great faith and comfort in knowing that the person whose hands were on the wheel at any given moment was the person that you would want there,” said Balderson lauding everyone from the pathologists, to the physicians, nurses and other staff who took care of him, including Diehl, Kelsey, his transplant physician Mitchell Horwitz, MD, and ABMT Clinic nurse practitioner Kristi Wiggins, MSN, ANP, APRN-BC. “They were at the top of their game. I cannot possibly imagine that I could have been taken care of any better anywhere else.”

It was a cardio-thoracic surgery scholarship that first led Balderson down the path to Duke 20 years ago. He's been the PA for thoracic surgical oncologist Thomas D’Amico, MD, ever since. Balderson evaluates patients pre-operatively, performs clinic visits, and handles triage when needed. He’s also D’Amico’s “eyes” for complicated surgical cases by manually manipulating a vital camera.

Balderson said there’s nothing he can imagine that could matter more than continuing to care for patients who, like his colleague and friend Dr. D’Amico, continue to inspire him.

“I see the way their minds wrap themselves around their diagnosis,” he said. “One minute they are sort of shrouded in terrible darkness and insecurity, like I was, and the next minute they’re putting one foot in front of the other.”

Like many of his patients, Balderson is choosing to live in the present.

“You can’t live in the past because you’re angry and frustrated and you can’t live two weeks, two months down the road, because that’s such an insecure place to be, not being able to predict the future,” he said.

He’s pressing on, through surgical innovation and compassionate care, with his mission to improve the quality of life of those he serves.

Many thanks to Dogwood Creative for the video production for this story.