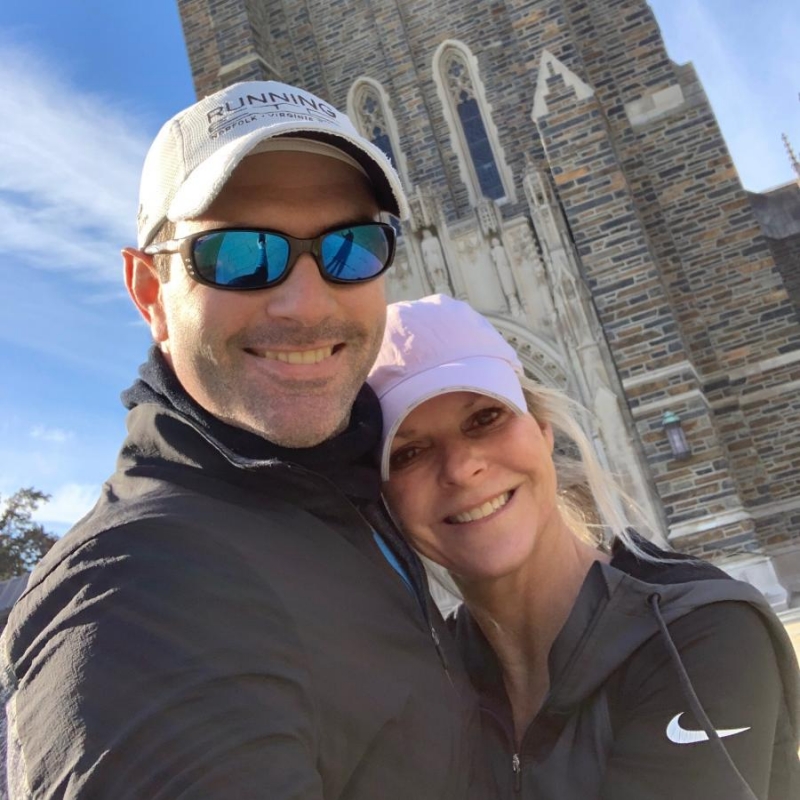 Chantal Rose-Denman, 44, has been running since she was 15 years old.

Blessed with a physical ability denied her father — who suffered from adult-onset myotonic muscular dystrophy before his untimely death — she ran her heart out.

Shortly after the birth of her first child 17 years ago, she began to run competitively. Marathons at first. A decade ago, with two more children added to her brood, she also took up ultra-marathons — trail running 50Ks or 50 milers about twice a year.

There was no stopping her stamina for running or mothering, until the day, last September, that she felt a lump behind her right femur.

“I thought, “This is weird,” but I could still run, so I didn’t think much of it,” shared Rose-Denman, who'd been running eight miles a day all summer and was also busy chasing after a one-year-old.

When after a month the bulge appeared to grow and she started to lose range-of-motion in her right leg, the Virginia Beach resident made an appointment to see a local orthopedist, expecting to learn her knee was swelling from a stress fracture. An X-ray, then an MRI, then an MRI with contrast was requested.

“That’s when I started thinking, “Something’s not right,”” Rose-Denman remembered. “I called a friend who’s a surgeon and told him I was nervous. I actually said as a joke, “Could this be cancer?” He said, “No, cancer doesn’t generally grow there.”"

The scans told another story. Her orthopedist, with tears in his eyes, told her and her husband Ashford that he suspected a slow-growing osteosarcoma. Bone cancer. But, he reassured her that a simple surgery might be enough to take care of it.

“It was Friday and I’d been planning to run an ultra the next day, so I asked him if I still could,” said Rose-Denman. “He said, “I want you to run this race.”

A cancer specialist in Richmond that the couple went to see the following week concurred that Rose-Denman’s cancer would probably only require surgery; no chemotherapy.

As good as that sounded, she recalled, “Something in our gut told us to find someone else.”

“They were able to see us so quickly,” said Rose-Denman. “We just felt immediately comfortable and we trusted them.”

When she came-to after surgery, this past January, she learned that the tumor quickly growing on the posterior side of the distal femur was actually a high-gradesurface osteosarcoma. In order to get the best margins, Brigman had replaced most of her femur and knee joint with prostheses. Her kneecap remained intact. She also learned that chemotherapy would be required after all.

Osteosarcomas are rare. The most common type is intramedullary osteosarcoma, and it’s most often diagnosed in teens. A high-grade surface osteosarcoma, the one Rose-Denman had, is a rare variant of a rare cancer, Brigman said, and is seen in a somewhat older demographic — 20 to 30 years-old on average. The five-year survival rate for osteosarcoma is about 60 to 70 percent.

Following recovery, Riedel connected her with a doctor at Virginia Oncology Associates, part of the Duke Cancer Network, so she could start infusions of cisplatin with doxorubicin, the standard-of-care therapy that’s notoriously hard to take. Treatment exhausted her and she lost all her hair. She suffered an infection mid-way through and required additional surgery and antibiotics. After completing the fifth of six prescribed rounds of chemo in mid-June, she became so sick her doctors decided it was time to stop.

A Leg to Stand On

“After multiple blood transfusions and my red and white blood cell counts constantly low, I had started to doubt my body’s strength,” said Chantal, who’d always been at the peak of health before cancer. “Right after the chemo started coming out of my body, I felt like myself again. It’s just so toxic. Of course, it saves lives, too. But it’s definitely a lot.”

Like many cancer patients, she said she’d gone into survival mode to get through each day. She likened her cancer journey to an ultramarathon.

“I literally had to have the mindset of an ultrarunner,” she said. “When you’re running an ultra, you’re not going to feel good the whole time, and you’re going to want to quit some times. So, you have to dig deep within yourself and continue on.”

Rose-Denman is now working through “annoying” residual neuropathy and doing physical therapy — stretching, walking, and the elliptical — with the goal of increasing her range-of-motion from 75 degrees to 90.

She now acknowledges that the ultramarathon she ran one day after diagnosis last fall may have been her last. But she hasn’t lost her edge.

This fall, she’s prepared to walk a 5K — specifically the DCI sarcoma program’s 10th Annual Strike Out for Sarcoma 5K & Family Fun Walk on September 8, where she's also been invited to be a featured speaker.

“Through my journey, I grew so close to my Duke family,” said Rose-Denman. “Honestly, it’s the greatest honor that they thought of me; I’m just blown away.”

She’ll make a big family weekend of it, with her four kids, her husband, her in-laws, her brother and his family joining her and cheering her on.

This mama-of-four, according to a t-shirt she wears proudly, maintains she’s “just an ordinary girl kicking the crap outta sarcoma.” Though her latest scans showed no evidence of disease and her doctors are hopeful, she knows the trail ahead is long and could be bumpy.

“Chantal is extraordinarily motivated, and has an incredibly positive emotional outlook and great support from her family and friends,” said Brigman, who continues to follow her recovery and progress. “She is in a great position to do well.”

“My goal, which is against Dr. Brigman’s wishes, though I may have convinced him, is to run again,” she said. “So, when I look ahead, even if it means three miles slowly one day, that would just be so inspiring. It would be such a gift to be able to run again. And if not, then I have to realize it’s just not part of my life anymore.”

The Strike Out for Sarcoma 5K & Family Fun Walk, kicks off on Sunday, September 8, at 8:30 a.m. at WakeMed Soccer Park, 201 Soccer Park Drive, in Cary, North Carolina. Run/Walk Pre-Registrationis $30 and on race day is $40. The 100-yard Kids Dash is $10. Registration fees include t-shirts for kids and adults, 5K timing chips and post-race refreshments. Children will receive cotton t-shirts and finisher prizes. This family fun day also includes a silent auction, kid's corner with games, crafts and a bounce house, and a dunk tank for a chance to “Dunk a Doctor.” A survivor walk and an awards ceremony is also on the agenda. Join us at the event where sarcoma patients, survivors and loved ones come together with care teams and researchers to raise awareness and funds and have fun!

Circle Photo (top): Chantal Rose-Denman and her husband Ashford visited the Duke Chapel in January on the day of her last run before surgery.