No One Should Battle Cancer Alone, Community Helps 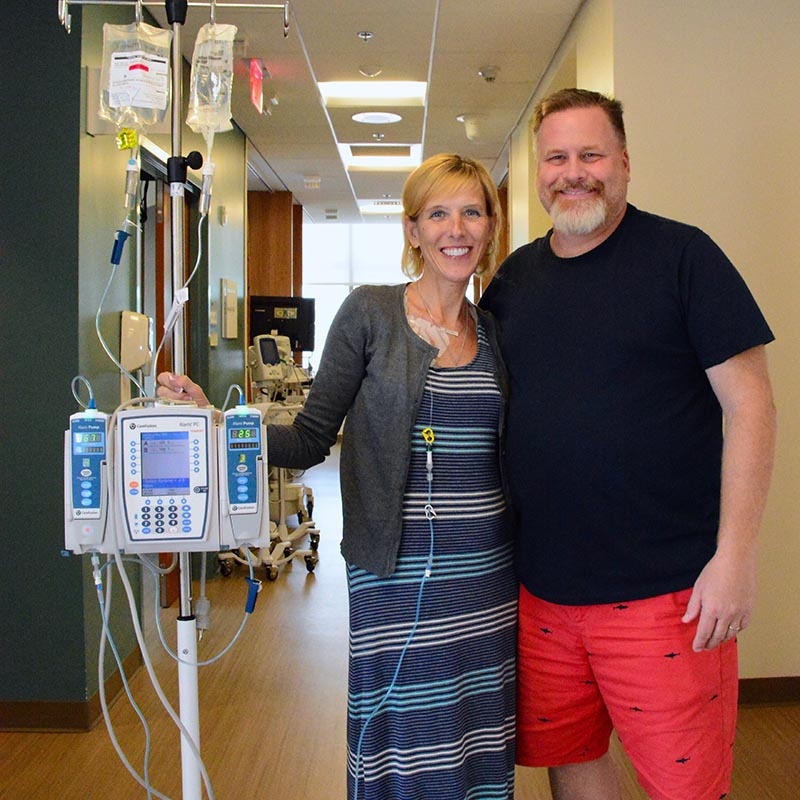 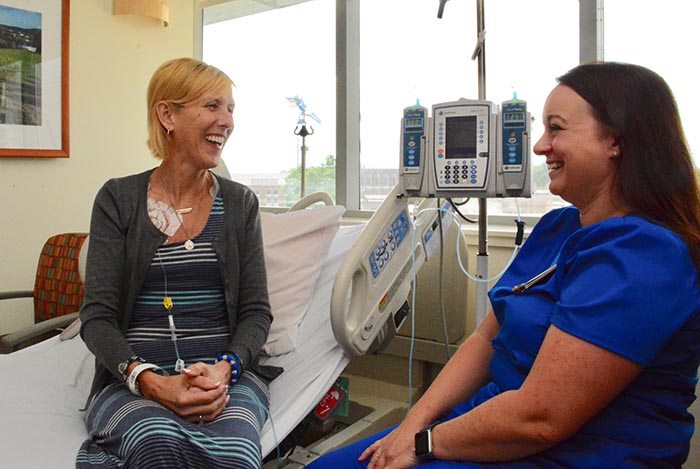 Laura Gould-White shares a laugh with Mary Susan Moss, RN, an infusion nurse at Duke Cancer Center. Gould-White is battling stage 4 metastatic rectal cancer. After multiple lengthy hospital stays, surgeries and ongoing cancer treatments, Gould-White and her family are experiencing financial toxicity. "The term financial toxicity is relatively new and it is used to draw parallels between the physical toxicities of chemotherapy and the cost-related burdens cancer patients feel," says Yousuf Zafar, MD, who has studied and written extensively on the growing problem.

Diagnosed with stage 3 rectal cancer and admitted to a local hospital, Laura Gould-White, 48, a wife and mother of three, found herself besieged by bill collectors even as she was fighting for her life.

“As a stay-at-home mom it’s been my responsibility to handle the finances,” she said, tears rolling down her cheeks. “If making it through surgeries and treatments and lengthy hospital stays is not enough to manage, the added burden of how to pay the bills on time is just flat out overwhelming.”

Gould-White was just 47 years old when she visited her primary care physician complaining of an extended period of constipation. After a rectal exam, her doctor ordered a colonoscopy, which revealed a growth in her rectum.

“I think he knew even before the colonoscopy this was very serious,” shared Gould-White, who lives in Raleigh. “He sent me to a local oncologist who began treatment straightaway.”

Gould-White’s care included oral chemotherapy twice a day, Monday through Friday, and radiation once a day, Monday through Friday, for 28 weeks. Halfway through her treatments she began to experience excruciating stomach cramps. Her oncologist assured her that this was a side effect of her treatment. However, weeks went by and the pain became so severe she could endure it no longer. Gould-White was admitted to a local hospital where she was told she had radiation enteritis, a condition in which radiation therapy causes inflammation, in this case of the small intestine.

“My condition was so poor that I remained in the hospital for five weeks,” shared Gould-White. “When after four weeks the swelling had not improved, I had to have surgery to remove the affected area of my colon.”

It was during that time that Gould-White and her family began facing what Duke researchers call financial toxicity – a situation in which a cancer patient has out-of-pocket costs that cause intense financial difficulty. According to the National Institute of Health (NIH), cancer is one of the most expensive conditions to treat in the United States. Today’s cancer patients are paying higher premiums, copayments and deductibles than ever before.

“At about the time I was diagnosed, my husband was offered a new job with another company providing better pay and greater opportunity to move ahead,” Gould-White said. “However, that meant that during the first three months of his employment we had to purchase health insurance from the marketplace. These were added expenses we could not anticipate or even prepare for.” 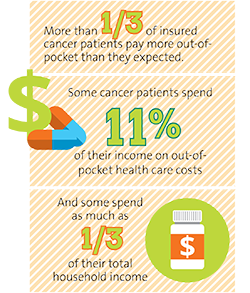 After multiple hospital stays, surgeries and chemotherapy and radiation, in January Gould-White was declared cancer-free – but not for long. In May routine blood test showed her white count was high. A CT scan reveals nodules in her lungs, and a PET scan confirmed the nodules were cancer. She now had stage 4 metastatic rectal cancer.

Seeking a second opinion, Gould-White, 48, was referred to Duke Cancer Institute where she is being treated today by medical oncologist John Strickler, MD. She wears an infusion pump so she can receive intermittent chemotherapy. Gould-White, whose cancer is incurable but treatable, said doctors hope to shrink the nodules in her lungs and keep her cancer from spreading elsewhere. To address the financial stresses associated with her care, Strickler referred her to licensed clinical social worker Greg Bankoski.

“Duke’s clinical social workers are available to assist patients and their loved ones cope with the emotional and practical concerns that come with a cancer diagnosis and subsequent treatment,” said Bankoski. “We help families find solutions to common problems that present during treatment.”

Through the Duke Cancer Patient Support Program Gould-White was able to connect with Tracy Berger, a licensed family therapist.

“I wanted my family to be on the same page – to understand just how sick I was and how vital it is that we cooperate as a family,” she said. “Tracy has been helpful to us. We all have benefitted tremendously from her counsel.”

Gould-White, who while recently hospitalized in Durham apart from her family battled bouts of loneliness and worry, tries to remain hopeful, but is realistic.

“I’m stage 4,” she said. “There are no other levels left. Either I beat this or I die. I’m just hoping my doctor has a million tricks up his sleeve.”

To learn more about the Duke Cancer Patient Support Program and the many support programs and services offered, visit dukecancerinstitute.org/dcpsp or email cancersupport@duke.edu.