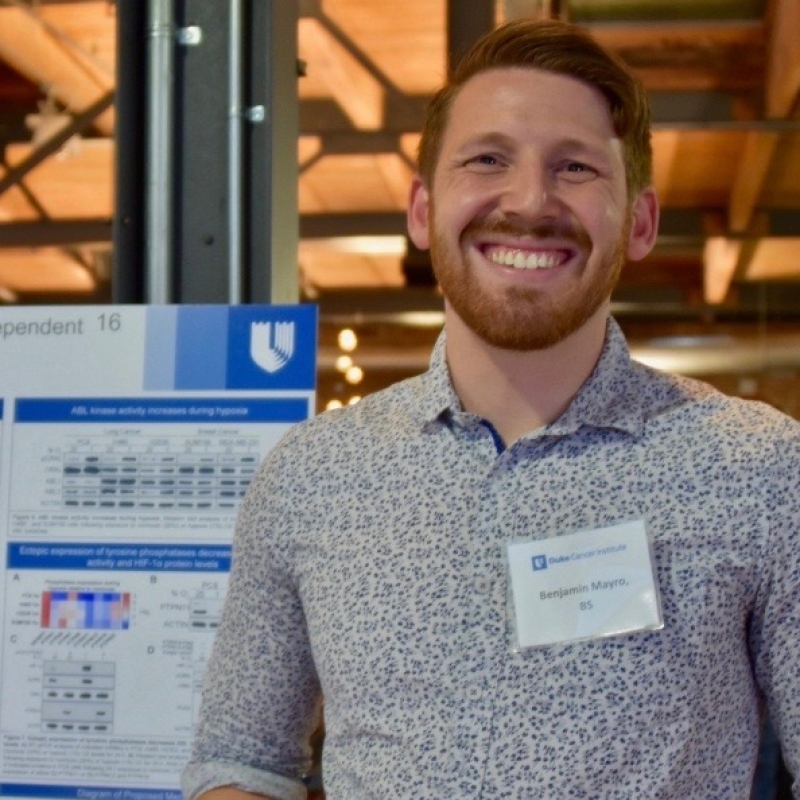 Eight young Duke Cancer Institute scientists — one top trainee selected from each of the eight  DCI Research Programs — were given the opportunity to present their pioneering cancer research projects via Zoom at DCI’s Seventh Annual Scientific Retreat today (October 23) After presenting, the trainees took questions, via the Zoom chat, from their mentors and peers.

Seven of these trainees received a $1,000 award from the DCI and the trainee with the most innovative basic science research project, as is customary at the annual scientific retreat, received the 2020 Robert and Barbara Bell Basic Science Cancer Research Award in the amount of $5,000.

Executive director of DCI, Michael Kastan, MD, PhD, who served as emcee of the retreat, presented the Bell Award to Benjamin Mayro, a PhD candidate in the Department of Pharmacology and Cancer Biology and member of the Pendergast Lab, for his research project (carried out in collaboration with Jacob Hoj, PhD) — “The ABL2 kinase regulates an HSF1-dependent transcriptional program required for lung adenocarcinoma brain metastasis.”

Mayro was the retreat’s first presenter. He announced that he and Hoj have discovered a targetable signaling pathway linking a druggable protein tyrosine kinase to a transcription factor network upregulated in brain-metastatic lung adenocarcinoma that is required for cancer cells to survive, grow and infiltrate the brain parenchyma (the functional tissue in the brain). He and Hoj (now an F99-K00 postdoctoral fellow with the Wood Lab) are currently finalizing a co-first author manuscript on the subject.

Mayro previously collaborated with Hoj (first author) and lab leader Ann Marie Pendergast, PhD, in a project to define the role of a different pathway (the TAZ-AXL-ABL2 signaling axis) in the spread of lung cancer to the brain, which resulted in a publication last year in Cell Reports. Mayro was second author of the Dec. 10 paper, which explained their discovery of actionable targets for the treatment of brain metastases in mice harboring lung adenocarcinoma, a subtype of non-small cell lung cancer. Among their findings, they learned that that the ABL kinase allosteric inhibitor ABL001 (asciminib) was able to cross the blood brain barrier, markedly decreasing brain metastasis and prolonging survival.

Brain metastasis among lung cancer patients, (particularly the NSCLC type), is primarily driven by mutations in the EGFR and KRAS genes and by a number of activated tyrosine kinases. Over the past couple years, the Pendergast Lab has focused on identifying inhibitors that can stop these kinases from promoting cancer metastasis, including lung cancer to the brain.

With far fewer therapeutic options available for lung to brain metastasis (LCBM) than there are to treat primary lung cancer — because of the inability of most drugs to cross the blood-brain barrier — the overall prognosis is dismal.

“Lung cancer brain metastasis (LCBM) is a deadly complication of lung cancer,” said Mayro. “The overall five-year survival rate of lung cancer patients is low at only 18%. The median survival of a patient with LCBM is four to six months.”

This makes the quest to find actionable targets and drugs that work on those targets to stop progression of lung cancer in the brain all the more urgent.

“Since joining my lab, Benjamin has demonstrated exceptional talent for research and shown to be an innovative scientist with high productivity,” said Pendergast. “He has shown enthusiasm, motivation, commitment to research and research skills that together are strong predictors for achieving a successful academic career, and will support Benjamin’s ultimate goal of becoming a professor at an academic institution. He is wonderful graduate student, and well deserving of the Bell Award. It’s a big honor.”

Mayro was recruited to the Molecular Cancer Biology (MCB) Graduate Program at Duke University in August 2017 and joined the Pendergast Lab for his dissertation research in 2018. He was awarded the Duke Chancellor’s Scholarship, given to the top graduate school applicants, for his outstanding academic record, research experience, and leadership qualities.

Mayro successfully submitted and was awarded his own F31 NIH pre-doctoral fellowship award. He was selected as the Duke University institutional nominee to the NIH F99/K00 fellowship award. He has several ongoing independent research projects that have uncovered novel signaling networks activated in metastatic cancer cells.

Scott Antonia, MD, PhD, a thoracic medical oncologist, professor of Medicine, and director of the DCI Center for Cancer Immunotherapy, delivered the faculty presentation. He discussed progress in the development of immunotherapy treatments, particularly in lung cancer, at his center.

Tyler Jacks, PhD — the David H. Koch Professor, director of the Koch Institute for Integrative Cancer Research at the Massachusetts Institute of Technology (MIT), and an investigator at the Howard Hughes Medical Institute — delivered the O. Michael Colvin Memorial Lecture — “Dissecting tumor evolution at single cell resolution." Before his loss in 2013, O. Michael Colvin, MD, served as Director Emeritus of the Duke University Comprehensive Cancer Center and Professor Emeritus of Medicine at Duke University School of Medicine. As co-leader of the Duke Cancer Center’s Experimental Research Program, his many achievements included pioneering work on drugs that damage the genetic material causing cancer cells to replicate. Begun in 2015, the O. Michael Colvin Memorial Lecture has been a featured highlight at every DCI Scientific Retreat since.