Running for His Life 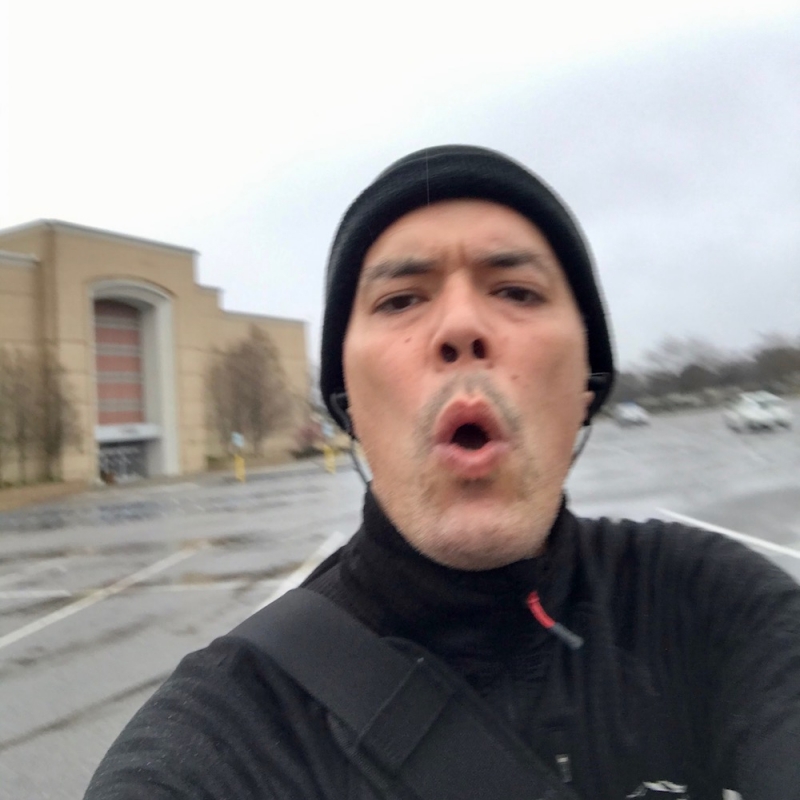 The woods are lovely, dark and deep. But I have promises to keep, and miles to go before I sleep. – Robert Frost 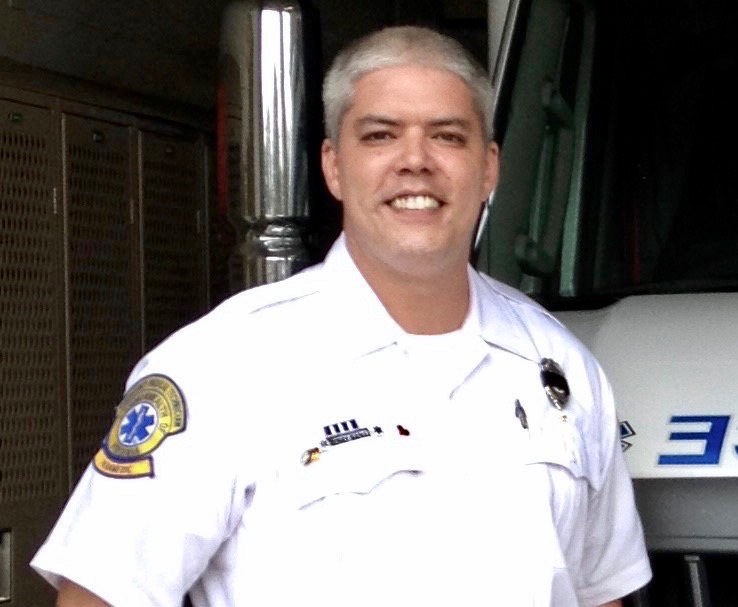 Jerry Lee Sams, 49, has been a paramedic since he joined the Plaza Volunteer Rescue Squad 16 in Virginia Beach back in 2007. He’s been nominated for and received many service awards since then, including “Life Saver,” “Class Act,” and, twice, “Rescue Squadsman of the Year.” And he was part of a team, in 2015, that earned “Call of the Year” for saving a pregnant mother from cardiac arrest during a blizzard.

In 2016, after nine years serving as a volunteer, the City of Virginia Beach EMS employed him. A part-time master machinist who for decades had struggled to make ends meet, it was Sams’ first full-time paying job.

“I was doing the woodworking, volunteering, going to school… doing all these things, and finally I got hired,” said Sams. “Finally, someone believed in me.”

For Sams, coming into his own was a long-time coming.

Born and raised in Japan by his Japanese mother, Sams first came to the U.S. in 1986 in hopes of finding his biological father, an American serviceman. Arriving in California at age 16, with only $2,000 to his name, he didn’t get very far in his search and ended up in a foster home in Sacramento. For two years, until he turned 18, he was able to finish his secondary studies and learn English. About a year later, Sams’ brother left Japan to join the U.S. Navy. Then Sams’ sister arrived stateside.

Sams and his sister, together, would find their biological father in Waco, Texas. They relocated to Waco and their mother soon joined them. Hopes for a happy reconciliation, however, were short-lived. Sams’ father got a job transfer to Oklahoma City, and Sams, who preferred to go his own way, stayed with his mom back in Texas and learned the machinist trade.

In 1996, Sams’ brother, by then stationed in Norfolk, Virginia, urged him to move back east where there were more promising career and educational opportunities. It wasn’t so easy. Sams settled in Virginia Beach where he worked multiple jobs and kept in shape with rigorous weight training. When in 2004 he was struck with Hodgkin lymphoma, he was working four jobs and didn’t have adequate health coverage. It was quite the struggle to get treatment, but he got through it and survived.

Sams worked hard to build back the strength he’d lost to cancer and started down the path to becoming a volunteer, then full-time, paramedic. He also discovered a new talent for running, which gave him “bouncing off the wall” energy in his daily life. He’d run 90 to 120 miles a week; often “commuting” to work this way come rain or shine. Eventually, he was tackling ultra-marathons.

To say that Sams’ diagnosis in December 2018 — stage 3 esophageal adenocarcinoma — was a major blow to his life goals is an understatement. Used to rescuing others in medical distress, he never expected to be the one in need of saving.

This time, he sought care at Duke. His medical oncologist John Strickler, MD, said this new cancer appeared to be unrelated to the old cancer he’d had 14 years before. And despite a family history (his father passing away from liver cancer in 2007, his mother surviving thyroid cancer and his grandmother, stomach cancer), Sams wasn’t found to have any genetic proclivity to getting cancer.

Sams enrolled in a Duke-sponsored phase 2 clinical trial — Pembrolizumab, Radiotherapy, and Chemotherapy  in Neoadjuvant Treatment of Malignant Esophago-gastric Diseases (PROCEED). This treatment included chemotherapy infusions, radiation therapy, and immunotherapy (pembrolizumab). He received these treatments through the spring and summer under the care of Strickler and radiation oncologist Manisha Palta, MD, the lead investigator. Then, in October 2019, thoracic surgeon Thomas D’Amico, MD, surgically removed part of Sams’ esophagus and one-third of his stomach.

Following this complex surgery, D’Amico encouraged Sams to get up on his feet and walk a few laps around the critical care area.

“I think I did 371 laps,” laughed Sams, recalling that the nurses joked he’d put the other patients on the floor that day to shame.

Sams was on the road to recovery.

Following surgery, as part of the clinical trial, Sams continued to receive immunotherapy; completing his final infusion on February 10 this year.

Shortly thereafter, he began to feel weaker than normal and walked with a limp, but thought this might be a consequence of his recent surgery.

Then the situation changed rapidly. On February 17, nausea and dizziness overtook him on the job.

“A coworker thought I was under the influence of drugs and alcohol because I was holding to the wall,” recalled Sams, adding that the city’s Occupational Health department demanded he be evaluated right away.

“If they found nothing, then they would have had to put me on some kind of leave,” said Sams. “Luckily, the ER was smart enough to do a head CT.” There were masses in his brain.

“It was his off hours when we called him, but Dr. Strickler was kind enough to put a team together in four hours,” recalled Sams. “He called me at about 9:30 p.m. and said, the team is together and they’re ready to see me. The next day. You just can’t get any better than that.”

Sams had an MRI on February 18 then met with neurosurgeon Patrick Codd, MD, and radiation oncologist Jordan Torok, MD — both with the Duke Center for Brain & Spine Metastasis at DCI — to plan next steps.

He had five tumors; the largest two in the left cerebellar and left parietal lobes of his brain were each about the size of a pea; one a bit larger than the other. Within a week, on Feb. 24, he underwent a craniectomy to surgically remove the largest one. Surgery to remove the other big one was too risky due to its location.

Less than a week after surgery, despite a right-side deficit that threw him off balance, he was up and running six miles a day.

Codd also gave Sams the go-ahead to continue his woodworking to help strengthen his motor function.

“This is the third cancer I’m dealing with and it’s kind of rough,” admitted Sams. “The prognosis is not good.”

The five-year survival rate for esophageal cancer, a rare cancer making up only 1% of all U.S. cancer diagnoses, is slightly less than 20%. Metastasis of this cancer to the brain or spine is rare, but increasing, and carries an even poorer prognosis.

On March 5, Sams began five days of successive weekday SRS (stereotactic radiosurgery) treatments for the remaining tumors and scar tissue left by surgery. Each day, he went for a run.

By March 17, Sams, like many Americans, was hunkered down in his home, social-distancing.

Unfortunately, just as he’d been ready to go back to work, he’d gotten the order to work from home — to do online training rather than risk exposing his immune system to COVID-19.

Then, “more bad news.” His cancer had spread to the lungs.

On March 25, he texted again: “I am doing well. Staying away from everyone… I’ve completed 154 miles since the surgery. Everything is improving daily. Eating well, too.”

As of April 14, Sams was still describing his running speed as excellent. His endurance, though, was diminished by not being able to take deep breaths. Increasing pain in his back had also become a complicating factor. (When he was at Duke April 4 for his latest MRI, cancer was found in two of his vertebrae).

On April 16, he’ll return to Duke for four days of palliative radiation to treat the pain.

He plans to stay at DCI’s home-away-from-home for cancer patients, *Caring House, as he has many times before. There’s a convenient shuttle that runs back and forth to Duke, but when Sams stays there, he prefers traveling to his appointments by foot.

For nearly a year, Sams has been advocating for the construction of a sidewalk along a stretch small stretch between Cornwallis and Duke University drive that could make the Caring House to Duke route a 20-minute brisk walk ending at the “magnificent” Duke Chapel, just steps away from the Duke Cancer Center.

His running route is much longer, more circuitous. Last year, during chemo and radiation treatments, he clocked 428 miles.

“I was running fast and no one could keep up with me,” remembered Sams. “Sheridan (director of Caring House) looked at me on my second day (of treatment) and said, “You mean you run back and forth between here and the cancer center?” And I said, “Yeah why not, right, you’ve got to live your life, it’s not the end of life. Am I dying? Do I look like I’m dying?”

One year later, Sams remains effusive with his praise of and gratitude for all his Duke physicians, PAs, and nurses and believes he’s received "world-class" care.

While he knows he is battling an aggressive cancer, he wants to get his story out and inspire other cancer patients. He’d also like to make another plea for the City of Durham and Duke to come together and consider his construction request.

“Every patient should have the opportunity to walk or run to Duke Cancer Center so that they can enjoy the exercise for themselves and the view,” said Sams.

In his mind, there’s no underestimating what an individual, even a cancer patient, is capable of.

*Due to COVID-19 precautions, Caring House had to temporarily close to protect the health of its guests. Until it reopens, Caring House will subsidize $40/night of hotel bills for Duke Cancer Institute patients that are currently unable to stay there due to the closure. This will be up to a maximum of $500 per patient and this program will continue until funds are depleted. Reach out to your social worker or patient navigator for more information or call 919.864.4497.

“I just don’t share my information with anybody,” said Sams, a Virginia Beach critical care paramedic, master machinist and avid runner. “This is going to be an inspiration for other patients who come through."

For questions or referrals related to patients with brain or spine metastasis, please email new patient coordinator Eris Worlds or call her at 919.681.3038.

For brain or spine metastasis referrals within Duke, clinicians may submit via Ambulatory Referral to Brain & Spine Metastasis Center on Maestro Care or (REF468).