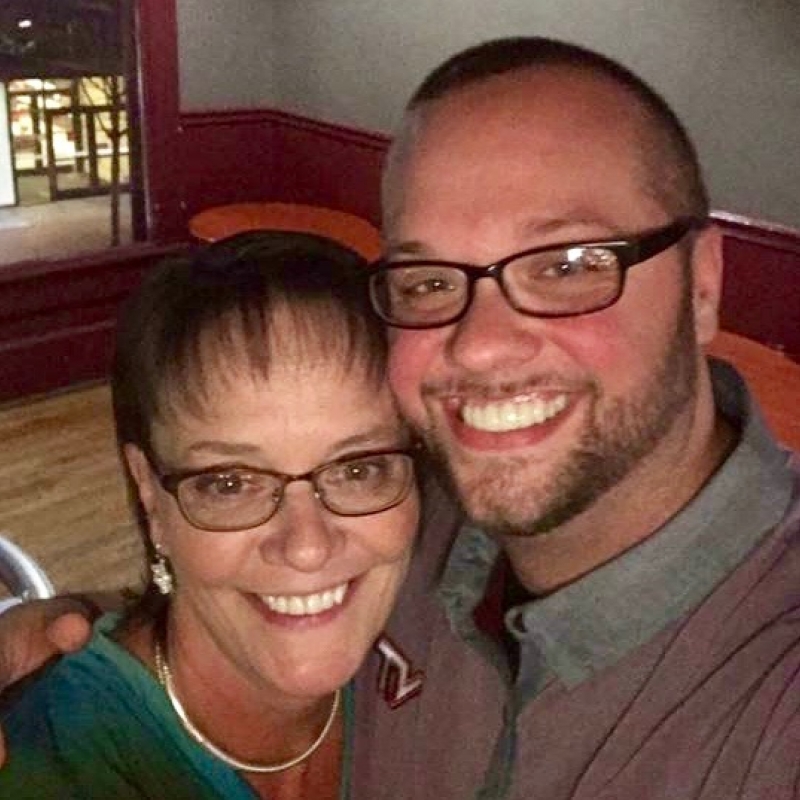 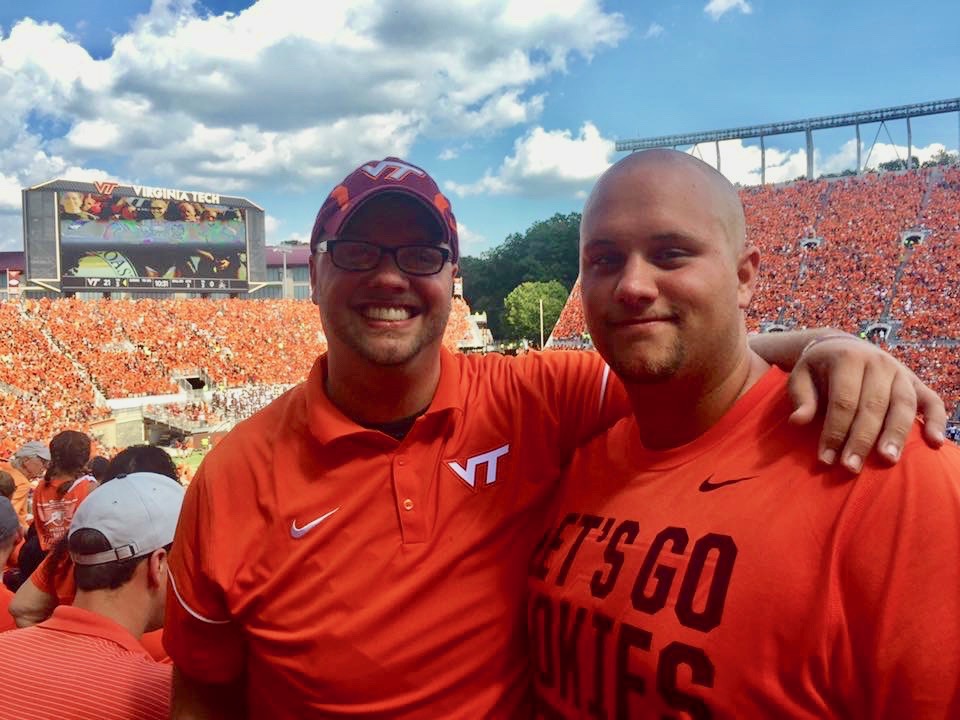 Blacksburg, Virginia resident Anthony Willard, a financial analyst for Wells Fargo, developed bladder cancer six years ago at the age of 24. An avid sports fan, his favorite teams are the Duke Blue Devils (basketball) and Virginia Tech Hokies (football). Here he is (at left) with his brother Jake enjoying a Hokies game on September 24, 2016.Ever since he was a young boy growing up in Virginia, Anthony Willard, 30, has been a fan of Duke men's basketball. As a young man, he imagined he might one day make the 3.5-hour drive south to Durham, North Carolina, to catch a game.

He never expected that instead he’d be traveling to Duke for repeated visits for medical care.

But the young broadband sales representative did just that — spending the greater part of his ‘20s being seen at Duke Cancer Center for recurrent bladder cancer.

When in 2011 Willard first went to see his primary care physician after noticing blood in his urine and experiencing “extremely painful” urination, his doctor suspected it was probably just kidney stones.

However, tumors in his bladder came up on the scan — “a lot of them.”

“I had one the size of a golf ball and about 20 smaller ones,” said Willard, then 24 years old, admitting he wasn’t “super shocked” because he’d felt like something more than kidney stones must be going on.

Despite four surgeries and 15 rounds of chemotherapy over the course of a year, Willard’s bladder cancer was relentless. His body was struggling on defense. A full-court press was in order. So, he and his parents went to see bladder cancer specialist Brant Inman, MD, MS. Inman is a urologic oncologist with Duke Cancer Institute’s Prostate and Urologic Oncology program.

For the next three years (2012-2014), Inman would remove Willard’s bladder tumors each time they grew back and then Willard would undergo eight-week sessions of chemotherapy.

Then, in 2015, manageable turned to worse when Inman discovered new tumors in Willard’s kidney and ureter. Inman removed a section of Willard’s ureter, but was able to surgically reconnect it. In 2016, Inman removed Willard’s left kidney and some nearby lymph nodes. Chemotherapy again, followed.

“Being so young, I never really thought about cancer, and it hadn't really affected people in my life, so it wasn't talked about often,” said Willard. “I was scared at first, but my support system of family and friends made it better.”

According to the American Cancer Society, bladder cancer accounts for five percent of all new cancers diagnoses in the U.S., with nearly 80,000 cases diagnosed each year. It’s the fourth most common cancer in men and predominantly affects people in their 60s and 70s. Only 10 percent of patients are under the age of 55. With a range of treatment options, including surgery, chemotherapy, radiation, and/or immunotherapy, there’s an average five-year survival rate of about 78 percent.

Smoking is bladder cancer’s greatest risk factor, which, according to Inman, is believed to be linked to an estimated 50 to 70 percent of cases. Ten to 15 percent of cases, he estimates, are likely due to occupational exposure to industrial chemicals used in processing paint, dye, metal and petroleum products.

Willard said there’s no bladder cancer in his family, but admits he began smoking at the young age of 15. Inman recommended genetic testing just the same.

Even though Inman can’t say whether smoking caused Willard’s cancer — the lag time between most exposures, including smoking, and the development of disease is typically decades — the bladder cancer scare was enough to convince Willard to quit smoking a year post-diagnosis.

Since July 2016 there’s been no evidence of cancer in Willard’s scans or cystoscopies.

He travels to Duke Cancer Center every three months for monitoring appointments because neither he nor his doctor want to take any chances with a cancer that keeps coming back. They know that beating cancer is far from a slam dunk.

“So far, I’m feeling pretty good,” said Willard. “Dr. Inman has done wonders. He’s the best doctor that I’ve ever dealt with as far as personality and keeping me informed about how I’m doing.”

After more than 10 years working with a satellite service provider, Willard switched last year to a career in financial advising. But these days he’s also got some valuable “life advice” to dispense.

“Going through numerous surgeries and chemo treatments really changed my outlook on life,” said Willard. “It’s a horrible disease, but I live every day fully. And I tell everybody to live each day the same. I also try to get everyone I know to quit smoking.”

If you are a cancer patient or cancer survivor who smokes and needs help quitting, consider making an appointment with Quit at Duke, the Duke Cancer Center Smoking Cessation Program. Run by a clinical tobacco treatment specialist, the program offers a comprehensive evaluation, evidence-based medications, multiple behavioral intervention strategies, and access to clinical trials. The clinic is located inside the Duke Cancer Center in 2-2. For more information or to make an appointment, please call 919-613-QUIT or visit Quit at Duke.