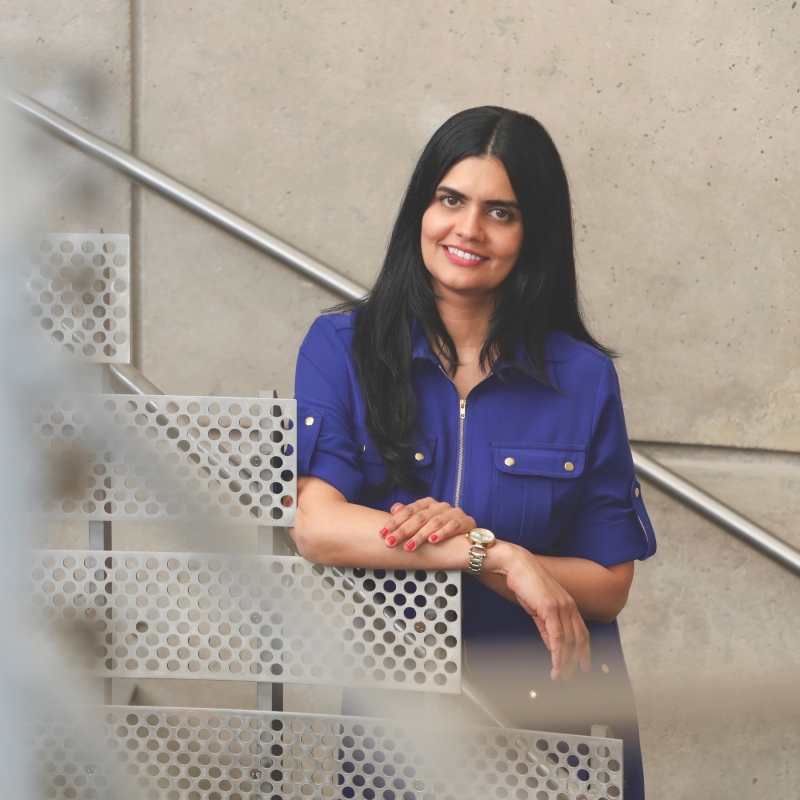 GAYATHRI DEVI, PhD, studies how inflammatory breast cancer cells are able to evade the body’s programmed cell death mechanisms that normally get rid of damaged or abnormal cells. “We see that these cancer cells ... are basically saying, ‘Bring it on, I’m going to use this fundamental cellular process to my advantage.’” (photo by Ken Huth)When you think of breast cancer, you probably picture a telltale lump. Gayathri Devi, PhD, dispels that image with a few photos: a person’s chest with what looks like a rash, then a thermographic version of the image showing the heat from elevated blood flow spread throughout the chest. This is inflammatory breast cancer (IBC).

Most patients with IBC don’t have a single tumor mass that can be isolated and removed. Instead, the cancer appears as clusters of tumor cells called tumor emboli that infiltrate the skin and lymphatic vessels of the chest. “It’s highly diffuse, so that even if you collect the tissue, there are hardly any tumor cells in the biopsy,” says Devi, an associate professor of surgery and pathology. And, patients are treated with chemotherapy and radiation before surgery, which adds to the lack of tumor samples for research. Devi is developing better ways to sample, image, and understand IBC, enlisting help from researchers and clinicians in many other fields.

Because IBC is so dangerous—it resists treatment and easily spreads (metastasizes)—Devi thinks that what she learns can be applied to help fight other types of aggressive cancers. The

Department of Defense agrees; in August 2017, they gave Devi and collaborators a $1.9 million “Breakthrough Award” to study why some breast cancers are more metastatic than others, based in large part on her pilot research with IBC. Collaborators include Mark Dewhirst, PhD, and Greg Palmer, PhD, who provide expertise in imaging; Mike Morse, MD, who helps with identifying immune biomarkers; and Shelley Hwang, MD, chief of breast surgery, and Shannon

McCall, MD, Director of the Duke Biorepository and Precision Pathology Center, who work to increase banking of patient tumor samples. 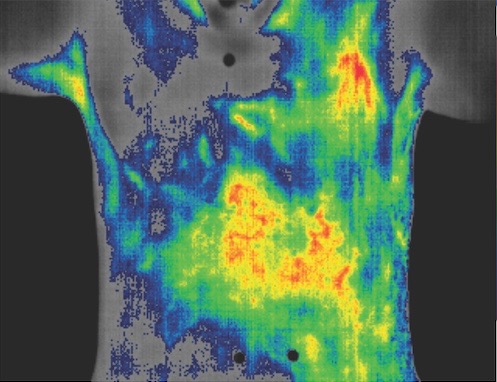 Inflammatory breast cancer (illustrated) is already one of the most aggressive breast cancers, but in African Americans it is even more aggressive, and it is also more common in African-Americans than in Caucasians. “It is a cancer health disparity,” Gayathri Devi, PhD, says. She is involved in a collaboration with NC Central University to study the molecular mechanisms behind these differences. “We are trying to find if there are immune correlates that are different in the host system that allow the disease to progress faster and more aggressively in this population,” she says.It is IBC’s differences that may hold the key to understanding all types of metastatic breast cancer. One characteristic that makes any breast cancer more likely to spread is if it invaded the lymphatic system. And about 95 percent of IBCs have already done that when diagnosed. Rather than spread through a single cell that travels the bloodstream, most IBC travels in clusters, via vessels in the skin that carry lymph—a fluid that contains immune system cells whose very job is to fight intruders. “How do these tumor clusters and tumor cells not only survive in that environment but also invade and go into different organs?” Devi says.

To study that question, Devi has developed some unique models; one takes cancer cells collected from patients and grows them in culture, and another in mice. “We aim to study

the disease from bedside to bench, then back,” she says. They take cell samples from patients, grow them in these models, then look for activation or inhibition of genomic and protein markers that regulate the cancer cells’ ability to survive, proliferate, and become invasive. Then the team will determine if patients express those same markers. The hope is that the markers that ring true in both the models and in the patients will be targets for better treatment.

Inside the body, IBC cells are accustomed to the “shear stress” of the lymphatic system—the movement of lymph flowing through vessels in the skin. Devi’s cell-culture IBC model uses machines to mimic that motion, enabling the researchers to study the actual formation of the tumor emboli— a hallmark of IBC.

Using these more realistic models, Devi has found that IBC is very good at escaping a tightly controlled process that our bodies use to get rid of abnormal cells, called programmed cell death. “To maintain homeostasis and cell populations in tissues, millions of our cells die every second and are replaced,” she explains.

To escape cell death, her laboratory has found, IBC cells take advantage of a process that normal cells use to survive during times of cellular stress, called the adaptive stress response. “The cancer cells are changing and adapting and signaling in the tumor microenvironment such that they are basically saying, ‘Bring it on, I’m going to use this fundamental cellular process to my advantage.’” If Devi could shut down that ability, she could slow down IBC and make it more sensitive to anti-cancer drugs.

Devi’s team recently found that IBC cells express high levels of proteins that inhibit programmed cell death. After screening drug and chemical libraries, her team tested an existing drug used to manage alcoholism, called disulfiram, and found that it can counteract those proteins. “We showed that disulfiram is able to override this adaptive stress response at multiple points,” Devi says. “It was able to kill the cancer cells while sparing normal cells in IBC.”

When the researchers combined disulfiram with copper, it improved the ability of the drug to get inside the IBC tumor clusters. “It’s very difficult to target and get all the way inside the tumor emboli, because it’s a cluster of tumor cells that are constantly moving and have different features,” Devi says. “Disulfiram in combination with copper provides a novel way to target and inhibit formation of the IBC tumor emboli directly.”

Devi and collaborator Hwang (the breast cancer surgeon) are seeking funding for a clinical trial that adds disulfiram to IBC treatment. That isn’t easy to get, because this treatment won’t be a money-maker. “Disulfiram is a generic drug. It’s very inexpensive to buy and therefore a challenge to get industry support for drug repurposing,” Devi says. “We need to engage advocates and increase community awareness. This is the reality of trying to fight an orphan disease.”

Join the Fight: You can help defeat aggressive cancers like inflammatory breast cancer. To give, visit DCI Development.

This article originally appeared in the Fall 2017 issue of Breakthroughs, a magazine produced twice yearly by Duke Cancer Institute Office of Development. Subscribe to Breakthroughs.