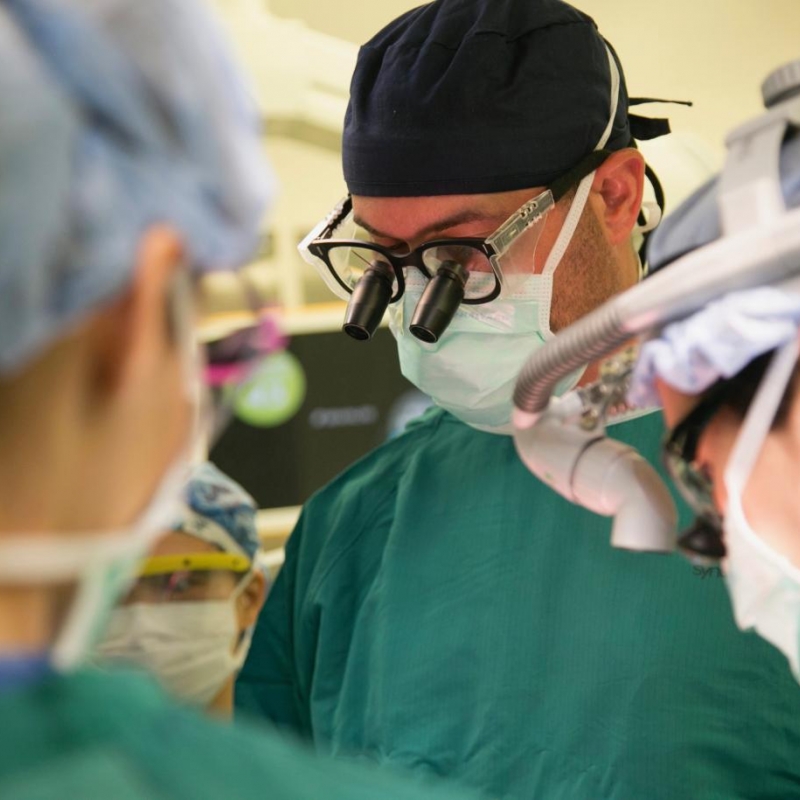 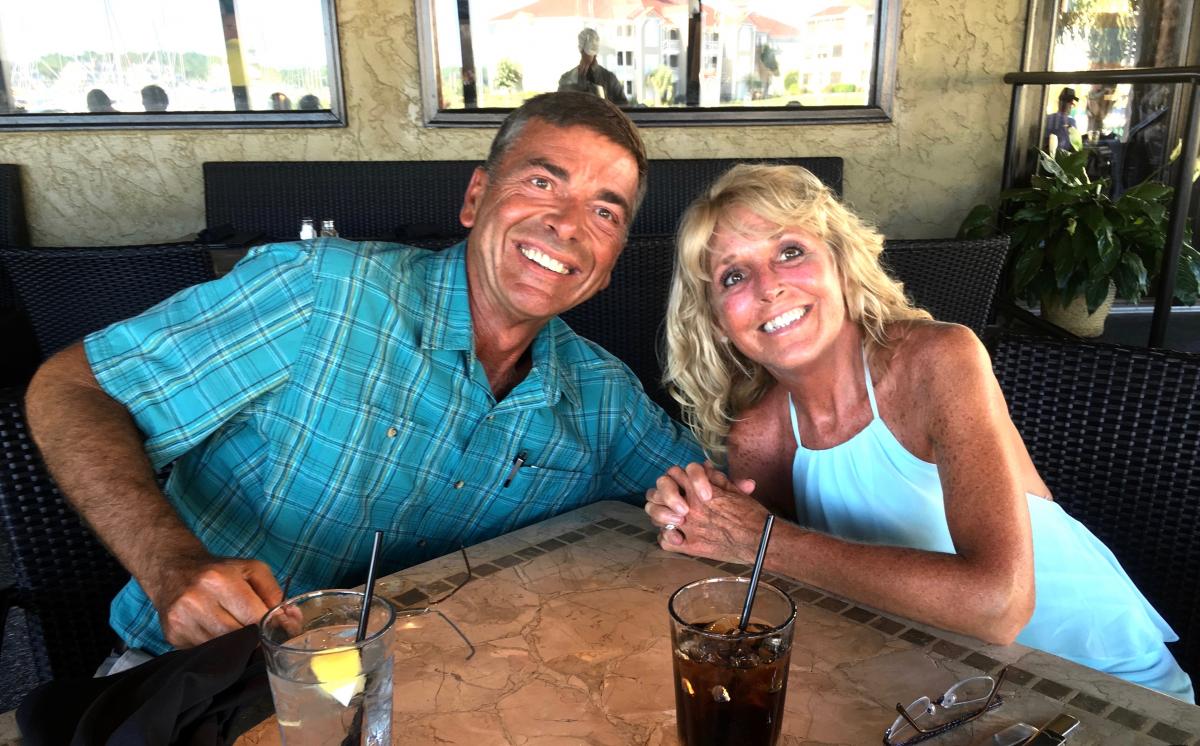 Dave and Lisa VanTress enjoy a nice dinner in July 2017-- the week before heading to Duke for Lisa's brain surgery.During the summer of 2016 Dave and Lisa VanTress retired from their jobs in Syracuse, New York, and headed south to the sunny shores of South Carolina, where they could be close to family and indulge their passion for fishing. They bought a townhouse in Little River, a five-minute drive to the beach.

Around Mother’s Day weekend the following year, Dave and Lisa, the parents of six grown children, embarked on a 12-hour fishing charter. Three hours motoring out to sea. Six hours fishing. And three hours back. They caught a lot of fish that day.

“It was a great trip, but when I got off the boat, I couldn’t regain my ‘land legs,’” said Lisa VanTress, then 55 years old. “I was unstable on my feet. For the next couple days, I was stumbling around and I even fell down the stairs.”

She was treated for suspected seasonal allergies. But within a week-and-a-half, she took a nasty tumble while getting into bed. A trip to the emergency department (ED) revealed, by her description, “two huge cancerous brain tumors.” Further investigation indicated, to her surprise, that she had lung cancer.

Nearly 150,000 Americans annually are diagnosed with cancer that has metastasized, or traveled, to the brain. The number is projected to rise. Because of a larger aging population, combined with improvements in cancer screening and care, up to 30 percent of patients with solid tumor cancers (mainly lung cancer, breast cancer, melanoma, genitourinary cancers, and renal cell carcinoma) can expect their cancer to spread to the brain.

Surgeons, oncologists, and radiation oncologists affiliated with the center are nationally known for their use of cutting-edge technologies that prolong life, and the center is actively both participating in and sponsoring groundbreaking research to better understand brain and spine metastasis and develop new treatments.

"Brain metastasis used to be viewed as a death sentence and patients were rarely even offered surgical treatment, but as the quality of our treatments has improved, so has survival,” said Fecci, who launched the Duke Brain Metastasis Program shortly after he arrived at Duke in 2014. “Some of my first patients are still alive and doing well, while a decade ago that type of survival was just a dream.”

VanTress eventually found her way to Fecci’s operating room — a three-hour drive from home — after initially being told by her local oncologist she should fly her family in and get her affairs in order because there was nothing more to be done. And, so, she did, anticipating the end was near. However, her eldest brother, a hospital CEO in a neighboring county, quickly made some phone calls and connected her with Duke for a second opinion. 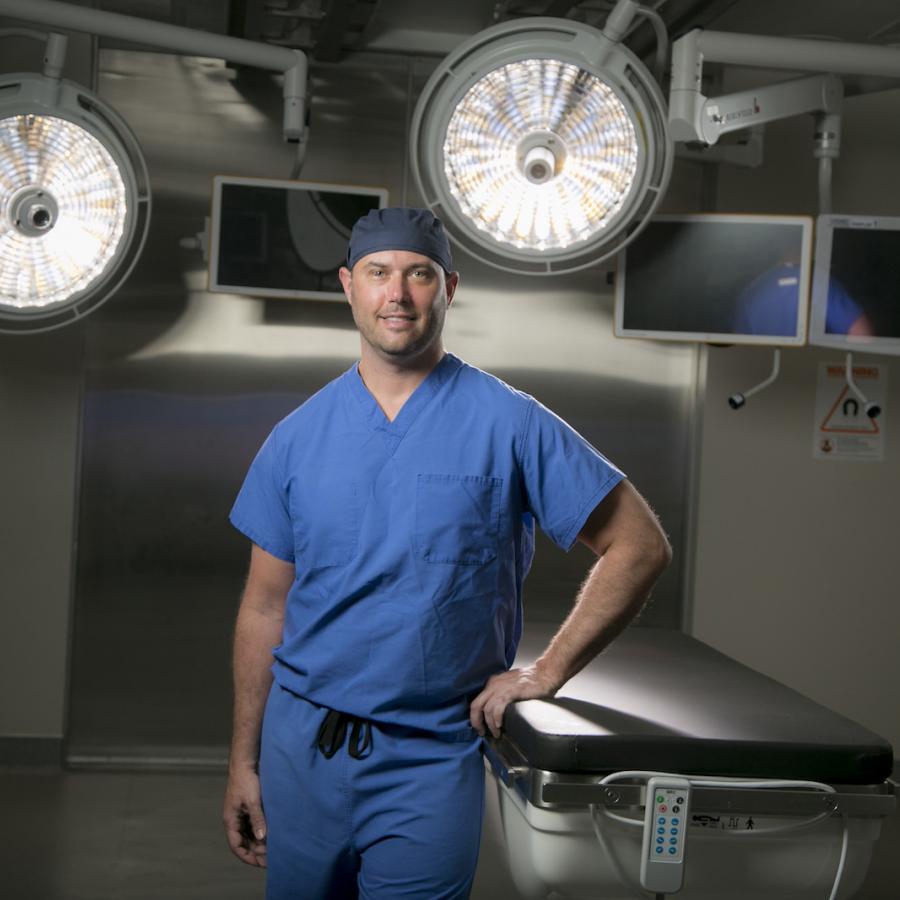 Peter Fecci, MD, PhD, a co-director of the new Duke Center for Brain and Spine Metastasis and director of the Brain Tumor Immunotherapy Program. (photo by Jared Lazarus)“From a brain tumor perspective, Duke is really Mecca for brain metastasis patients — a population that has been traditionally cast aside,” said Fecci, who, last summer successfully removed both of VanTress’ tumors, even though outside of Duke they were deemed inoperable. Scott Floyd, MD, PhD, a prominent Duke radiation oncologist within the center, followed her surgery with a stereotactic radiosurgery (SRS) procedure, the application of surgically precise focused beams of radiation to the tumor sites.

“At Duke, we’ve changed our approach to these patients to be more aggressive in terms of what we can offer them, with the recognition that it provides benefit,” said Fecci.

“We really feel that SRS, with or without preceding surgical resection, is the gold standard for care,” said Fecci.

Hundreds of SRS procedures on brain metastases are conducted at Duke yearly, and Duke’s radiation oncologists, including Kirkpatrick and Floyd, said Fecci, are some of the thought leaders in the field.

Offered at only a handful of other centers nationwide, Duke is one of the highest volume centers that offer this procedure, in which targeted doses of laser heat are used to treat recurrent lesions or those that are too difficult to remove by open surgery. It’s also used to treat radiation necrosis (tissue damage) caused by previous radiation. Fecci performs 20 to 30 LITT procedures per year, and he said those numbers are rising quickly.

Working closely with patients’ primary oncologists — including those treating thoracic, breast, melanoma, renal carcinoma and gastrointestinal cancers — the Duke Brain and Spine Metastasis Center provides comprehensive care to all patients with brain metastases, regardless of their primary tumor site.

“There are few places in oncology where multi-disciplinary input is as critical as it is with the care of patients with brain metastases,” said interim director of the melanoma program, April Salama, MD. “We often use many different treatment modalities — surgery, radiation, and drug therapies.”

A patient navigator, Natalie Ashley, joined the center last month to ensure continuity of care across disciplines. She is helping to guide brain metastasis patients through the complex cancer care system — from addressing barriers to access, to providing emotional support, to ensuring timely access to brain and spine metastasis treatment and coordinating patient care between multiple cancer-related disciplines including (but not limited to) medical oncology, radiation oncology, neurosurgery and palliative care. 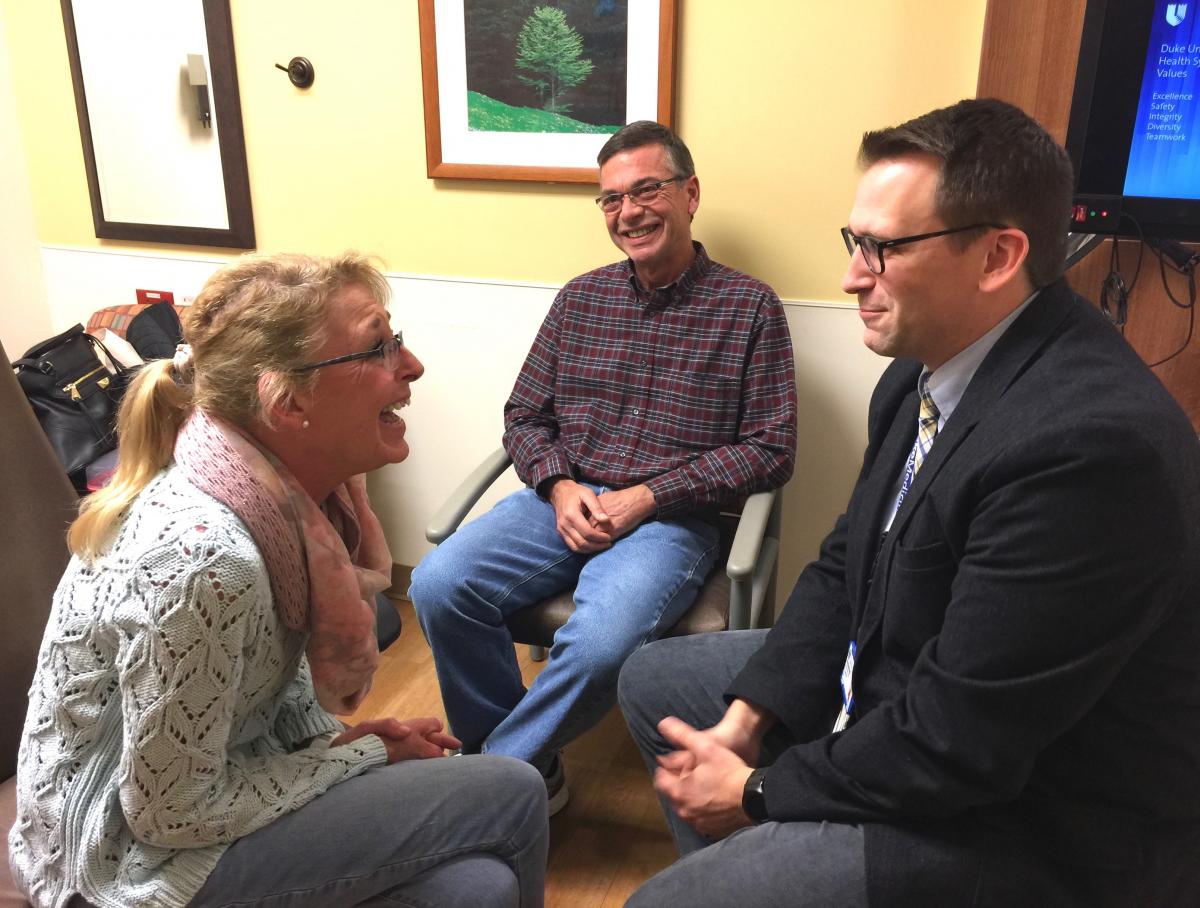 Lisa VanTress and her husband Dave get good news from her thoracic oncologist, Dr. Clarke. "With treatment, the cancer on my lungs continues to shrink," said Lisa, who's been able to get back to doing what she loves - fishing, crocheting, singing, and playing the guitar - since being treated at Duke. "God is good." The retired court clerk even made it home to New York to meet her first grand-child, born in January.A multi-disciplinary tumor board made up of neurosurgeons, orthopedic surgeons, radiation oncologists, radiologists, and pathologists meets weekly to discuss patient cases. A steering committee for the center also meets regularly.

“The development of brain metastases is a common event for so many of our patients, particularly those with lung cancer,” noted thoracic oncologist Jeffrey Clarke, MD, who’s treating Lisa VanTress’ lung cancer. “The center will help to facilitate the multidisciplinary and high-quality care these patients need and promote a new wave of research to help future patients.”

The center has already awarded two $50,000 grants, with the possibility of an extension to $100,000 in the second year; one to Fecci — focused on overcoming T cell exhaustion as a means of improving immune based therapies for tumors within the brain — and the other to Anne Marie Pendergast, PhD, for identifying actionable signaling networks that promote breast cancer metastasis to the brain.

“We hope to set a new paradigm for how doctors all over the country will treat this devastating complication of cancer,” he said.

For internal referrals to the Duke Brain and Spine Metastasis Center clinic, please contact program patient navigator Natalie Ashley via pager (2069741), the preferred contact method, by phone at 919.681.3038 or online via MAESTRO. You can also email Ashley at natalie.ashley@duke.edu.

Circle photo (top): Neurosurgeon Peter Fecci, MD, PhD, performs a LITT procedure (Laser Interstitial Thermal Therapy), guided by MRI. Targeted doses of laser heat are used to treat recurrent lesions or those that are too difficult to remove by open surgery, as well as radiation necrosis (tissue damage) caused by previous radiation. Duke is only one of a handful of centers to offer this. “Many surgeons come to watch us or learn from us, and I will often travel to teach the procedure at other centers,” he said. (photo by Jared Lazarus)